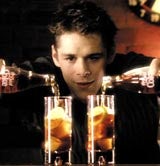 The move marks the end of a three-year relationship with Wieden &amp; Kennedy UK. Prior to the agency’s appointment in 1999, Diet Coke’s advertising was created by Publicis.

Coca-Cola says Lowe has been appointed on the strength of its work for Sprite and other brands. A spokeswoman adds: “We felt it was time to inject some fresh creative thinking into the brand.”

In March Coca-Cola launched the “Classes” cinema and television campaign for Diet Coke, created by Wieden &amp; Kennedy, which targeted men as well as women. The ads have the tagline “Taste the moment” and the second phase of the campaign is now on air.

The campaign departed from previous brand strategy, which featured women ogling male hunks. The company claims it will continue to market to a unisex audience.

New variant Diet Coke with Lemon launched in the UK last month, backed by an outdoor campaign created by Wieden and Kennedy.

Wieden &amp; Kennedy Amsterdam will continue to handle Coca-Cola’s Powerade drink and create support material for the brand’s football activity, including its sponsorship work for ITV’s The Premiership.

Sales of Diet Coke increased ten per cent by volume in 2001 (source: Canadean).