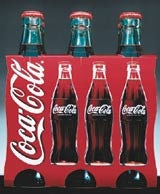 Coca-Cola is in talks to become an official partner of the new Wembley National Stadium in an effort to boost the brand’s presence in UK football sponsorship.

The £2m deal, which is expected to include pouring rights, would be a blow to rival Pepsi, which is already an official partner to the Football Association.

Industry sources say that Coke is eager to continue its association with UK football. The company’s sponsorship of ITV’s Premiership coverage runs out next year, when the television screening rights are passed to the BBC.

Among the plans being considered as part of the sponsorship deal is for Coke to brand the “Wembley Way”, the road leading to the stadium. An industry source says that Coke is keen to “own” part of the stadium, or its surroundings. Pepsi would have a presence at Wembley Stadium during FA-related matches.

Coke has an association with the World Cup and European Championship football, but lacks a strong UK property. Rival Pepsi has a strong hold on English football through its FA partnership, as well as ties with Manchester United and individual football stars.

Industry sources say Coke plans to invest about £6m in the European Championships, which are being held in Portugal next year. The company plans to give away 1 million footballs next year to promote the soft drinks brand during the tournament.

Industry insiders say the on-pack deal will be backed by an advertising campaign fronted by a football star, with Everton’s Wayne Rooney mooted as a possibility.