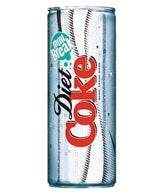 Coca-Cola Great Britain is test-marketing its Diet Coke brand in a smaller can, in an exclusive deal with retailer Boots. The soft drinks giant has reduced its can size in an effort to appeal to women who want to drink smaller portions.

The low-calorie cola will be available in a 250ml “mini-break” format as well as the existing 330ml cans, 500ml plastic bottles and 150ml mixer cans. The mini-break range will also include Diet Coke with Lemon and Caffeine-Free Diet Coke.

The initiative is in line with Coca-Cola’s strategy, outlined earlier this year, of concentrating less on volume sales and instead developing premium-priced packaging formats and new variants.

Coca-Cola is also aiming to build on Diet Coke’s links with films in the UK this summer. The company has launched a Diet Coke Film Fest promotion that will encourage UK consumers to vote for their favourite movie of all time.

Coca-Cola Co’s chief counsel in the US, Deval Patrick, has resigned after three years. Federal authorities are investigating the company over whether it shipped excess cola syrup to bottlers in Japan to artificially inflate sales.

Maher Bird Associates has developed the first TV advertising campaign for EDF Energy, to raise awareness of the company’s three regional retail brands – London Energy, Seeboard Energy and Sweb Energy. The ads will be appropriately branded in each region and the campaign breaks on April 18.

Hachette-Filipacchi UK has launched a TV campaign for Inside Soap magazine this week, its first since 1999. Fallon has created the ad and media is handled by Mediaedge:CIA. Inside Soap will also sponsor GMTV’s ‘Pick of the Day’ from April 26, for an eight-week period.

As the Diary notes (MW April 1), Hamish Pringle has created a product (Celebrity Sells) about the power of celebrity, and is leveraging this to become one himself. Perhaps his next book will be on the power of a product to create a celebrity (Products Promote?). In doing so, he should bear in mind that […]