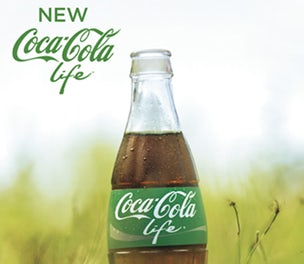 Taking into account its distribution and range Coke Life is outselling Coke Zero although in absolute terms its sales are just over one third of Zero’s, which saw value sales drop 8.7 per cent to £7.2m in the period. Coke Life did outperform Diet Coke Caffeine Free Cola, which saw sales fall month-on-month to £1.3m.

Initial sales and volumes for the brand were so low due the limited distribution. Coke soft launched the drink in July ahead of a full-scale rollout in September, spanning print, experiential, digital and outdoor ads.

The company will be pleased by Coke Life’s strong start following criticism from marketing experts, including Marketing Week columnist Mark Ritson,  that the drink lacked the natural ingredients needed to win over health-conscious drinkers.

Coke Life is a key weapon in the company’s battle to lift sales in developed markets where fizzy drinks are falling out of favour. Retail sales of the Coca-Cola drink tumbled 2.1 per cent year-on-year to £667.47m in the 52 weeks to the 19 July, IRI data shows. Volumes (number of litres) suffered a 6.2 per cent drop to 580.52 million in the period.

Despite the early signs of Coke Life’s success, it is too early to reach any substantial conclusions, as the brand has been heavily promoted in-stores. The in-store offers have meant the average price per litre was just 86p in comparison to £1.16 for regular Coke, found IRI.

Tim Eales, strategic Insight director at IRI says “It’s often not easy to tell whether a new brand is doing well or not with early launch sales data since most brands are likely to be kicking off with heavy promotions. This reduces the selling price and total sales value whilst the brand is still gaining momentum through steadily increasing distribution. Despite this, the early signs are that there’s a lot of life in Coke Life.”

*This article was updated 9.00am 6/10/14. A previous version wrongly stated Coke Life had outsold Coke Zero in value terms.