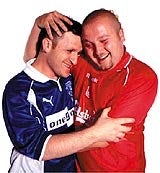 Coca-Cola is to slash the value of its sponsorship of ITV’s The Premiership following the decision to reschedule it away from the Saturday 7pm peak slot – first predicted in Marketing Week (October 4).

In June, the soft drinks giant agreed to pay more than &£50m for a three-year contract covering its sponsorship of The Premiership and advertising on ITV.

However, the show, hosted by Des Lynam, won an average of just 4.5 million viewers, which is far below the 7 million to 10 million predicted by ITV.

A Coca-Cola spokesman says: “From the outset Coca-Cola was aware of the potential for two schedules and negotiated accordingly. ITV has reverted to the second schedule and the price reflects the value of the audience the programme will now be reaching.”

But industry experts claim that Coca-Cola will also have negotiated a get-out clause that will come into play if the highlights programme fails to deliver a specific audience or there is change in circumstances.

Coca-Cola and Granada Enterprises, the sales house that negotiated the deal on the part of ITV, refused to discuss details of the contract.

Granada Broadcasting and Enterprises managing director Mick Desmond admits that there will be “a readjustment of money” under the agreement with Coca-Cola to reflect the fact that The Premiership will go out at 10.30pm from November 17, with a repeat showing at 9.25am on Sunday mornings.

He adds: “It [The Premiership at 7pm] was reducing the capability of the whole of Saturday and it wasn’t taking a big enough audience through to programmes like The Frank Skinner Show and Who Wants to be a Millionaire.”

If the ratings improve then Granada and Carlton both expect revenue to follow.