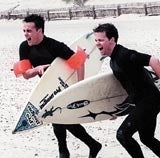 Coca-Cola is to sponsor the second series of ITV1’s prime-time entertainment programme, Ant &amp; Dec’s Saturday Night Take-Away. The deal is thought to be worth more than &£500,000.

The soft drinks giant will sponsor ten episodes of the family entertainment show, which returns to TV screens this Saturday (January 11).

The deal means that Coca-Cola will be sponsoring two programmes on ITV1 on Saturday nights – it already sponsors The Premiership, which is broadcast later in the evening.

The deal was negotiated between Granada Enterprises and Coca-Cola’s media agency BBJ. Break bumpers have been created by McCann-Erickson featuring two security guards – Goran and Evan – who, when left to look after the office for the weekend, order pizza and a bottle of Coke and invent games to alleviate their boredom using the food and drink as props.

In a separate deal negotiated by Carlton Media Sales, Unilever’s SlimFast is sponsoring holiday programme Wish You Were Here? and its day-time spin-off, for 26 weeks.