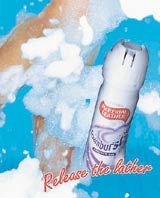 Colgate-Palmolive is to launch a range of shower mousses under its Aromatherapy brand to challenge PZ Cussons’ market-leading Imperial Leather Foamburst shower range.

Like the existing bath and shower Aromatherapy ranges, the shower mousses will be positioned to moisturise skin as well as create a “mood” based on the fragrance.

Advertising plans have not been revealed, but industry sources say that the new product will be backed by a significant part of the brand’s &£4m annual marketing spend. Palmolive is handled by Rainey Kelly Campbell Roalfe/Y&R with media buying by Mediaedge:CIA.

An industry insider says: “Colgate-Palmolive has obviously seen the sector as a growing concern and has decided it wants to join in.”

Competition in the shower market has intensified this summer. Beiersdorf extended its Nivea shower range into the foam sector in May (MW April 10). Imperial Leather responded with a &£2m outdoor and sampling advertising campaign created by BDH/TBWA last month.

The foam launch comes swiftly after Palmolive’s extension into a fourth variant known as Sensual. The range will be backed by dedicated TV advertising in the autumn as well as a four-week poster campaign breaking next month.

TV and video rental company BoxClever has appointed Miles Calcraft Briginshaw Duffy to its £1m advertising business, after a three-way pitch against Leagas Delaney and an undisclosed agency. The agency has been appointed to handle BoxClever’s creative advertising but also to advise on the development of the chain’s business proposition and brand. The chain has […]

Perspectives Red Cell has been appointed by BT to create a new brand identity for its Defence Fixed Telecommunications Service.

The Canadian Tourism Commission has created an ad to run on Cabvision, the TV screens installed in 100 London black cabs. Cabvision carries four channels of programming including CNBC, comedy, lifestyle and London.