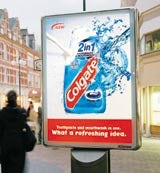 Colgate-Palmolive is believed to be planning a UK launch of Colgate Herbal Propolis, a new toothpaste variant which, it claims, has anti-cancer properties.

Propolis is a sticky substance which bees use as “glue” to build their hives. It contains a range of complex compounds, is rich in flavonoids and vitamins and is a popular ingredient in alternative medicines and health supplements, as well as being used in traditional Chinese medicine. Research suggests that it may possess antibiotic, antimicrobial and anti-cancer properties.

The brand has already helped to drive significant market growth for Colgate-Palmolive in Russia and China. In April, when Colgate-Palmolive announced its first-quarter results, the company claimed its share of the toothpaste market in Russia and central Europe was more than 25 per cent, helped by strong sales of Colgate Propolis. Sales in the oral-care division were up by nine per cent in Europe for the first quarter of 2005, compared with the same period in 2004. Last month, Colgate-Palmolive chief operating officer and president designate Ian Cook told an analysts’ conference that “consumer response and share response to this entry has been very, very strong.”

So far this year, Colgate-Palmolive has had two major product launches, with foaming toothpaste Colgate Oxygen and battery-powered toothbrush range Colgate MicroSonic Power (MW June 12). The company has committed &£6.5m to supporting new product launches in the UK oral-care sector this year. Advertising for Colgate in the UK is handled by Rainey Kelly Campbell Roalfe/Y&R, and media is through Mediaedge:CIA.

A Colgate-Palmolive spokeswoman confirms that Colgate Herbal Propolis has been launched in other European Union countries, but denies plans are being made for a UK launch.