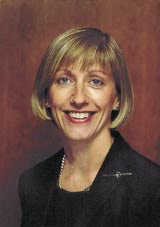 Colgate-Palmolive vice-president and UK general manager Karen Guerra is to take up the same position at the company’s office in France.

The UK company has yet to announce her replacement. Formerly Colgate-Palmolive marketing director, Guerra has worked for the company for ten years and will move to take up her position in Paris in mid-September.

After joining Colgate-Palmolive as sales director in 1989, a position she held for four years, Guerra was promoted to marketing director.

In 1996, she was appointed general manager for the UK.

Guerra says of her switch to head the French company: ‘I will miss the UK company, but I now have experience which will hold me in good stead to tackle new challenges in the French market.’

Young &amp; Rubicam joined the Colgate-Palmolive roster in 1982 and has handled the company’s entire &£16m account since 1995.