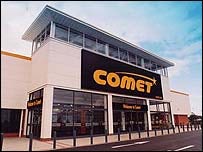 Electricals retail group Kesa, owner of high street chain Comet in the UK, posted a smaller than expected drop in sales for the period between November 1 to January 8. Like-for-like sales at Comet dropped by 2.5%.

But he warned the group’s gross profit margin has declined in its year to date calculations compared to last year.

Sales at the group’s French chain, Darty, fell by 6.2%, and its other businesses, which includes Menaje Del Hogar in Spain, BCC, Vanden Borre and Datart, fell 9.2%. Labroue says its Spanish operations are suffering from “the worst trading conditions in Europe.”

Last month, the group announced it would “streamline” store and head office staff to claw back losses after it reported an enormous 71% crash in profits in its half year results.