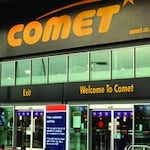 The chain, which is owned by Kesa Electricals, reported a 1.4% fall in like-for-like sales and total sales fell 0.6% to £1,650.2m compared to the same period last year following increased competition from the arrival of US electrical chain Best Buy.

The Kesa group returned to profit and reported pre-tax profits of £69.6m for the year to April 30, up from losses of £81.8m last year.

The group says it expects web sales to grow significantly in coming years and will continue with the strategy it revealed in December to focus on “expanding cross channel web sales, developing our current store network and further differentiating our service offer”.

It also plans to extend its store network to further locations, opening 25 stores per year.

Comet is poised to launch a campaign highlighting its improved customer service this week.

It said it will stick to its strategy plan announced last December to bolster profits and focus more on web sales – a tactic that helped annual online revenues leap by 8.9% in the Comet business.

Comet launched a promotional camapaign to coincide with the opening of Best Buy’s first UK store in April with a four-day opening festival and promotional prices.