Retail sales were up 15% to £604m, well ahead of the £579m predicted by analysts, while comparable sales increased by 8% including double-digit growth in European markets. Sales were hampered by low growth in Asia due in part to disruption in Hong Kong.

Burberry CEO Christopher Bailey said the retail sales growth reflects the fashion house’s “commitment to every element of the customer experience” from product to marketing to service.

“We’re please to report a strong performance over this important period, during which our teams worked tirelessly to bring the very best of the brand to the customers in our stores and online,” he adds.

“In London we are seeing great demand from local customers. This is really pleasing given the investment made in festive in local advertising with billboards. There has been a resurgence in the local domestic customers in London,” she said on a results call this morning (14 January).

Burberry’s relaunched trench coats and scarfs, which were supported by targeted marketing, had strong sales as did its My Burberry fragrance. Fairweather said the fragrance is particular is having a halo effect across the rest of the brand.

Personalisation was also a key theme and Burberry says it has seen a “strong customer response” to initiatives including customised fragrance bottles. Over Christmas on its website, 70% of My Burberry sales were monogrammed, as were more than 70% of ponchos sold.

David Alexander, a consultant at retail analysts Conlumino, says Burberry remains one of the most innovative brands in retail in terms of marketing while its interactive “My Burberry” campaign took personalisation “to new levels”.

However he cautions that this innovation comes at a cost and that Burberry may face tough budgeting decisions in future as it faces headwinds including unfavourable exchange rates and a difficult global economic environment.

Online once again outperformed, although Burberry wouldn’t comment on the actual sales rise. Mobile penetration doubled over the quarter, with Fairweather claiming that mobile sales in December alone were more than in the whole of its financial year 2013/14, albeit off a small base.

“Our investment in online and mobile is absolutely paying off,” she added. 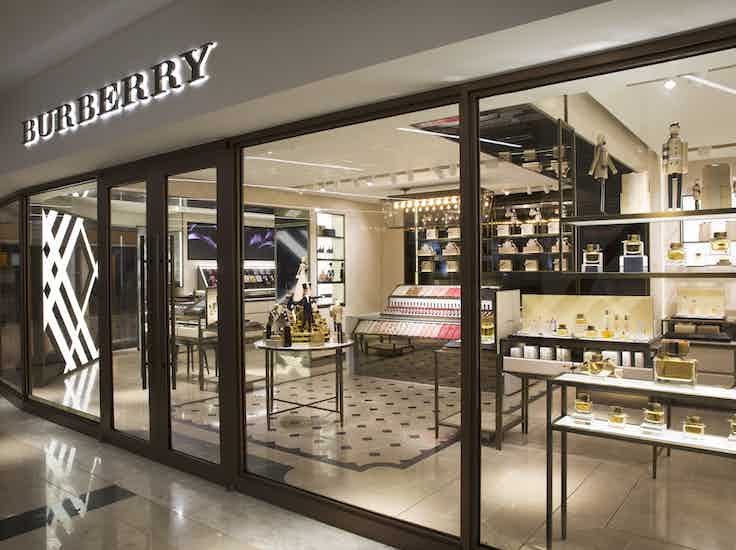 Burberry has credited digital innovations such as interactive marketing and in-tweet purchasing features for continuing ‘brand momentum’ despite profits falling in the first half.