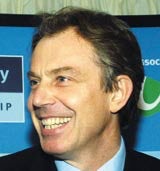 Companies and brands must take an avid interest in the behaviour of political parties in this year’s General Election to gain a better understanding of consumer opinion, according to new research commissioned by below-the-line agency Tequila Manchester.

The research, which will be released on April 13 – just weeks before the General Election takes place on May 5, shows that UK voters show the same level of mistrust and disloyalty to political parties as consumers do towards big companies. Respondents rated political parties alongside banks, insurers and utility companies as the leading customer-centric organisations.

Tequila Manchester chief executive Grant Mercer believes the next four weeks will prove that parties can no longer take loyal support for granted. He says: “Companies need to take note and ensure that loyal customers are continually rewarded.”

The research, which was carried out by market research company QuickWise, also shows that 83 per cent of respondents believe organisations spend too much time, money and effort on attracting new customers when they should be looking after their existing ones.

This also has an effect on voting, as consumers believe political parties should offer a good service and more than half of the respondents say they will switch parties if they are not happy with the service that they get.