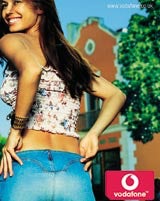 Vodafone has approached M&C Saatchi in London to work on a communications project.

The news that M&C Saatchi is working with Vodafone from its London office will be a cause for concern at Vodafone’s existing agencies, Wieden &amp; Kennedy and J Walter Thompson. M&C Saatchi has a track record of moving in on other agencies’ advertising business and its Sydney office handles Vodafone work.

JWT was appointed as global advertising agency a year ago, when Wieden &amp; Kennedy was retained as lead creative agency for Vodafone’s &£300m global account (MW May 16, 2002). At the time of JWT’s appointment, Vodafone claimed that the 20 agencies working on its business would be phased out in favour of JWT in all of its territories.

Global brand director David Haines confirmed that he had given M&C Saatchi in London a project, but said that it was not countryspecific. “Given that we already work with the agency in Australia, it is not a big surprise we have asked it to do this,” he says.

He denies that the project infringes on the company’s relationship with JWT and Wieden &amp; Kennedy. He also declines to give any specific details of the project’s nature.