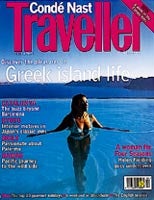 CondÃ© Nast, the publisher of Glamour and GQ, is planning joint ventures with a national newspaper and retailer Selfridges to promote its travel magazine, Traveller.

It is understood the promotion will include a pocket-sized version of Traveller, which will be distributed along with a national Sunday newspaper.

The publisher is understood to be planning to buy space in a window at London’s Selfridges store to advertise Traveller. CondÃ© Nast has produced a one-off contract title for Selfridges in the past.

CondÃ© Nast refuses to discuss the details of the sampling exercise and denies linking up with the retailer.

The latest figures from the Audit Bureau of Circulations (ABC) show that the travel magazine’s circulation grew by 19.7 per cent year on year and now stands at 76,163 copies, representing a 5.6 per cent increase during the past six months.

The March issue of the magazine included a covermounted, pocket-sized guide to Rome, Paris and Madrid. Early this year, Traveller rolled-out its largest subscription drive, with a gatefold insert offering a 50 per cent discount on a year’s subscription. The drive was designed to appeal to a target market of 300,000 affluent travellers.

The Traveller promotion follows the launch of CondÃ© Nast’s glossy US title, Glamour. The magazine was rolled out in the UK market earlier this month (MW last week ) as a handbag-sized version of the regular Glamour magazine.