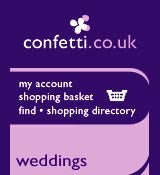 The UK’s wedding and gift websites are undergoing significant consolidation, with the takeover this week of Wedding Guide UK and WebWeddings by Confetti.com.

Both takeover targets had been bought by Internet investor Durlacher earlier this year. Confetti’s main backer is Atlas Venture.

Confetti managing director David Lethbridge says he plans to keep Wedding Guide and WebWeddings as standalone brands. “We are like a magazine publisher that has different titles. We don’t want to undermine the following that these brands have built up.” Wedding Guide in particular has won praise for its active bulletin boards.

Confetti has also announced a major tie-up with Marks &amp; Spencer, echoing similar “clicks and mortar” alliances between ThinkNatural and Superdrug, and Gameplay and Dixons.

The deal makes M&S the “leading anchor tenant” in an online shopping mall for wedding-gift list providers. The two will also develop close links between their websites.

Coolwhite.com, one of the UK’s more recent entrants into the online wedding market, claims to be unfazed by Confetti’s move. James Brown, a director of Coolwhite, says: “Consolidation is inevitable in what until now has been a fragmented market. I believe it is good for the wedding industry, allowing key players to focus on their target users instead of fighting for market share.”