Consumer confidence has slipped further, reaching a record low for the second consecutive month, with the cost of living crisis and looming recession all impacting people’s outlook.

The latest GfK Consumer Confidence Barometer reveals a headline score of -41 for June, a one-point decline compared to last month.

“Can it get any worse? The answer is probably yes,” Joe Staton, client strategy director at GfK tells Marketing Week. “With prices rising faster than wages, and the prospect of strikes and spiralling inflation causing a summer of discontent, many will be surprised that the index has not dropped further.” 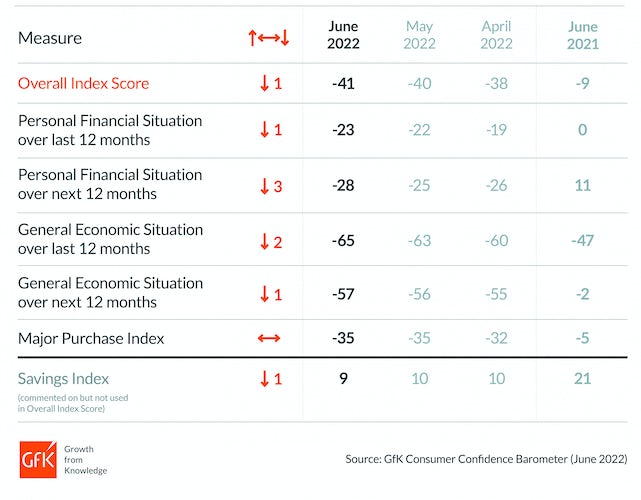 The four scores measuring people’s view of their personal financial situation and the economy in general have all declined this month, and all measures remain deep in negative territory.

Consumers’ view of their personal finances over the past 12 months has dropped one point to -23, while their outlook for the next 12 months has fallen three points to -28.

People’s opinion of the general economic outlook is worse. Looking back over the past 12 months, the score drops two points to -65, with people’s expectations for the economy over the coming year slipping one point to -57. 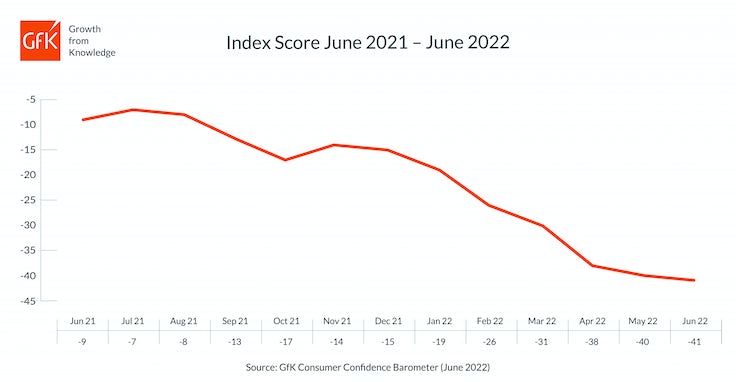 “It’s a small comfort that our major purchase sub-measure has not sunk any further but at a depressing low of -35 there’s nothing to celebrate,” Staton says.

“Unless there’s a dramatic turnaround in the macro environment, it’s difficult to see consumer confidence climbing out of this extended slump any time soon. That’s bad news for marketers but perhaps the priority now is to realign with market conditions and to monitor demand carefully as consumer buying habits shift.”

The consumer mood is currently “darker” than in the early stages of the pandemic and the 2008 global financial crisis, he adds.

“One thing is for sure, Britain faces a stark new economic reality and history shows that consumers will not hesitate to retrench and tighten their purse strings when the going gets tough.”