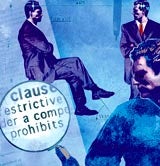 As brand owners across all sectors consolidate forming ever-stronger businesses, pressure has been placed on suppliers to go that extra mile, sometimes ten, that the customer demands.

Among the more iniquitous practices in the world of design this has led to the restrictive contract. Like some Faustian pact with the devil, designers claim this can give them a fleeting glimpse of well-paid creativity, in return for an eternity of isolation from any similar work for other brands, which may or may not be genuine competitors to the client.

The Design Business Association (DBA) has taken this issue sufficiently seriously to mount a legal appeal to the Office of Fair Trading (OFT). The upshot is almost certain to be a voluntary code of practice and, if such contracts are seen to have damaged agencies, possible legal action.

The DBA is taking advice on the restrictive nature of contracts on a number of fronts. At the top of its list comes the type of clause that prohibits agencies from working with competitors. DBA chief executive Ian Rowland-Hill says: “There are contracts which, in our lawyers’ view, contain clauses which are anti-competitive. In particular, there is a lack of definition as to what constitutes a ‘competitor’.”

Other areas that the DBA is exploring include client rights of ownership over all creative work leading up to the final design, and contracts which place unlimited liability with the design company, rather than keeping within the consultancy’s insured liability.

Rowland-Hill admits that quantifying contractual problems across the thousands of companies in the &£26.7bn industry would be an impossible task. Instead, the DBA is limiting itself to collecting examples.

Industry insiders report that statements limiting future options for a consultancy will often be struck out of a contract if queried. The DBA says that almost as serious as the question of why clauses are added to contracts in the first place, is the issue of why a design company does not bring them up with the client.

Rowland-Hill says: “Most design businesses don’t have lawyers on staff and some don’t read contracts closely enough. Some clients are not even aware of a contract’s implications.”

He adds that in other cases, the agency may be afraid of losing business or fear being typecast as a whistle-blower. That is why the DBA thinks it is important for the industry body to take on this role of appealing to the OFT.

The minimum that the DBA hopes will come out of this process is a code of practice, possibly endorsed by itself and the OFT. But when the association’s board meets this month, it will be examining additional options. Rowland-Hill explains: “It will be looking at whether clauses are, in fact, anti-competitive and whether it is something that we may have to push further.”

Opinions differ as to the source of these restrictive clauses.

View managing director Bernard Guly sees it as part of an attempt, on the client side, to extend business practices from above-the-line marketing to below-the-line. It is normal, he points out, for agencies handling national advertising campaigns to give clients the exclusivity they require. Guly says: “This may mean letting go of smaller slices of business to smaller agencies, but the big difference is that ad agencies are on retainers.”

Siebert Head planning and development director Simon Sholl places the emphasis elsewhere. He believes that the larger clients’ corporate lawyers work on the basis that the legal obligations binding suppliers of goods should equally bind suppliers of services. But Sholl says the fact that design companies are consultancies rather than suppliers makes all the difference.

Like many experienced in the workings of agency/client relationships, Sholl and Guly agree that trust has to be the basis of any collaboration. “If you start reducing things to the level of legalities, then at that point the relationship has broken down,” says Guly. He contrasts this sort of approach with the way that the accountancy and financial services sector has positioned itself, by and large, as the height of trustworthiness and integrity.

But it is the fragmented nature of the design industry that does most to encourage a cautious approach from clients. “You don’t have the same level of recognition for below-the-line agencies,” says Guly. “We’ve got hundreds of smaller companies which are all players in the industry. With that comes confusion for the client as well as a lack of certainty about professionalism.”

If the design company wants the client to be more trusting, the consultancy must also ensure it is open minded when there is a possible conflict of interest. It may simply mean that client A confirms that there is no conflict with the work being done for client B, but it is important that the issue is aired.

The hazy area of “competition” is a key one. No respected agency would endanger client confidentiality on any given project. In many sectors simultaneous work, on similar projects, for different competitors, would be out of the question. But the right to ban a consultancy from working with competitors is, at best, questionable and, at worst, illegal.

Two further issues help to tie this legal knot even tighter. Firstly, there is the DBA’s point that the term “competitor” is vague, especially in markets where single corporations increasingly have diverse interests across different countries. Secondly, many feel that the only way such restrictive clauses can be justified is if agencies are put on a retainer. PI3 strategic innovation director Steve Kelsey says: “Life gets a bit difficult when clients don’t offer contracts for future work, but expect the same exclusive conditions to apply. One has to ask, is this a one-way agreement or one which is mutually beneficial?”

In fact, the competition issue is riddled with paradox. “People are buying the breadth of experience that a company has in a given sector and knowledge of what does and doesn’t work,” says View’s Guly. “If an agency doesn’t work in that sector, you should ask yourself, why do you want to work with them? And why aren’t they working in that sector?”

Siebert Head’s Sholl points out that, in some categories such as spirits and pharmaceuticals, conflict is not only tolerated but positively encouraged. He says: “One is dedication; two is a conflict; three is a speciality.”

Even outside these categories, the client has good reason to value the agency’s experience. JKR partner Andy Knowles believes that it is prospective clients that create the competitor situation they are trying to control. “In our experience, when a company has designed some packaging for a client in a field such as cosmetics or confectionery, as soon as the design is in the public domain, we are contacted by potential clients in the same area,” he says.

Knowles believes that the attitudes enshrined in restrictive clauses are simply a reflection of an outmoded master/servant relationship. He points out that the newer, more successful, model is one of partnership.

For many who know the design industry well, the issue of restrictive contracts is, like the question of paid pitches, one which rears its head periodically, only to recede again. PI3’s Kelsey considers it unlikely that the DBA will slay this particular dragon – rather it will temporarily put it to flight. He says that the turnover of personnel on both the client side and among suppliers is, to a large extent, to blame.

“The DBA is trying to establish a legal precedent so it can get rid of the debate,” says Kelsey. “But if those precedents are unmade by the weakest members of the design community, then it won’t change anything.”

Whatever comes out of this episode from the DBA and OFT, it seems there will still be no substitute on the consultancy side for vigilance when examining proposed contracts, forthrightness when discussing them with clients and integrity when managing genuine conflicts of interest.

The voice of reason

In some cases, it comes down to a belief in the agency’s track record and its particular merits. “If a client wants to work with you on a project, they will be fair and reasonable,” says Perceptor client services director Tom Carling. “The legal department may draft a contract, but if you go back and query a clause, the client will listen.” He says it is a false economy to skimp on time and money by not having a draft contract properly assessed.

For many in the design industry the distinction between a client’s marketing department and the legal team which draws up its contracts, is an important one. In the end, the gulf between marketer and lawyer may prove to be even more significant than the distance separating marketing and design – if only it is tested.