Consistency, relevance and strong branding are all essential to build creatively effective advertising campaigns, the marketers behind Aldi’s ‘A Christmas Carrot’ and Marmite’s ‘Flippin Tasty’ ads have revealed.

Both ads have been deemed highly effective from a creative perspective by The Works, a monthly study conducted by Kantar in partnership with the Advertising Association and Marketing Week. The study asks 750 consumers each month what they thought of five of the month’s top ads across different media platforms – 150 consumers per advert.

Aldi’s Christmas campaign was crowned the most effective festive ad in December given its potential to deliver on both long- and short-term measures, scoring high on distinctiveness and enjoyability, brand affinity, and brand cues.

More recently, Marmite’s Pancake Day themed Facebook post was found to be the most effective ad on the platform in February, scoring in the top 10% of all UK ads on its ability to grab attention, as well as being highly rated for enjoyability, branding and differentiation.

Speaking on a panel this week, hosted by Kantar and Marketing Week as part of the Cannes Lions Festival of Creativity, Unilever’s UK and Ireland marketing director for foods, Georgina Bradford, advised marketers not to be “afraid of consistency” and its “power”. Marmite’s ‘Flippin Tasty’ pancake post ranks among most effective Facebook ads

“I’m a true believer in [consistency] and how successful you can be with it,” Bradford said.

Marmite, for example, launched its ‘Love it or hate it’ platform more than 25 years ago. The tagline has become both “infamous and iconic”, Bradford said, and has therefore remained “constant” throughout all campaigns and launches.

While the temptation to “shake things up” often arises, Bradford said the platform is “precious” for the Marmite brand and that it would be “mad” to ever deviate from it.

“Now it’s about the new angles and how we continue to invite new people into the brand,” she said.

Marmite is also lucky to have distinctive brand assets beyond Love it or hate it, including the “iconic” yellow and black colouring, Bradford added.

“We know we can keep showing those and don’t need to make it any more complicated. We can just show our pack and people instantly recognise it as for Marmite. So that was really key to be distinctive.”

Meanwhile, Aldi has also benefitted from the power of consistency. Its Christmas character Kevin the Carrot, first launched in 2016, is inspired by the idea that Christmas makes “the ordinary extraordinary”. The first ad led to a 15.1% sales uplift, and helped the discounter to attract 1 million new shoppers.

“And then Aldi did what I think was a very smart thing – they stuck with it,” said head of effectiveness at creative agency McCann and strategy director on the Aldi account, Jamie Peate.

“Everybody at Christmas always goes for something new, [but] we together made a conscious decision to not do that. To stick with Kevin, to invest in him and to [bring in] more characters.”

Fame imbues a “sense of familiarity”, Peate said, adding that through Kevin “Aldi has become famous for Christmas”.

Peate said the advertising industry is on the whole “very bad” at valuing previous and learned experience.

“If you think about doctors and architects and lawyers, precedent is everything. You learn to stand on the shoulders of giants… and you build on learning. We seem to think that is actually what you shouldn’t do – that you should forget all of that and come up with something that’s novel and innovative and not done before,” he said.

“In doing that we reduce our effectiveness dramatically.”

Kantar’s head of creative excellence, Lynne Deason, added that there can be a “conflict” between distinctiveness and longevity, as marketers have to work out how to keep a continuous campaign idea going while still reinventing it regularly.Aldi crowned this year’s most effective Christmas ad

However, Deason said that while it would be “easy” to pin Aldi’s effectiveness on its consistent use of the Kevin character, there has to be a level of authenticity to it.

“Aldi is known as a fun brand. It’s uplifting and so the whole tonality of it says Aldi. It’s unashamedly Aldi, and I think a lot of advertisers can learn from that,” she said.

“I get frustrated when I see the brands shoehorned into the end of an ad. Actually, people enjoy brand-centric advertising… Don’t be apologetic that the brand is there.”

According to Deason, there are three key pillars that link Aldi’s and Marmite’s ad from an effectiveness point of view. First, both have a “clear strategy” around the brand and what the brand needs to achieve is at the centre of the ads.

Aldi did what I think was a very smart thing – they stuck with it.

Secondly, both tap into an understanding of the audience, wider culture and human insight, Deason said, adding: “That’s really important because it earns attention. If we see something that’s relevant our brains are primed to pay attention to it.”

Thirdly, the two ads are tailored to work in the context in which they are being experienced – TV for Aldi, and Facebook for Marmite.

“Facebook is a context in which it’s really easy to to annoy people. You can very easily be an unwelcome disruption instead of an entertaining interruption,” she pointed out.

“This ad achieves being an entertaining interruption. And yes the brand appears from the outset, but that isn’t just what it takes to succeed. You’ve got to be integrated. So the fun and the drama are essential to that.”

However, Deason warned that at present, less time is being spent on human insight and understanding the audience than in the past, which impacts the ability of ads to entertain. She suggested this is a result of time pressure and the speed at which creative now has to be created, because the idea isn’t given enough time to “breathe”.

“Do you really give the agencies enough time to make those connections? Because that’s what makes advertising so powerful,” she said.

“But I think making content that works in the context in which it will be experienced is really key. You can’t take the same content and assume it will work everywhere.”

I’m a true believer in [consistency] and how successful you can be with it.

Unilever’s Bradford explained the Marmite brand knew it needed to be “disruptive” around Pancake Day in order to cut through and get consumers considering Marmite Peanut Butter as a pancake topper. As a result, the brand did its “quite obscure” ad involving a pancake-flipping squirrel.

Brands shouldn’t “underestimate” how “powerful” entertainment and humour in advertising can be, she added. 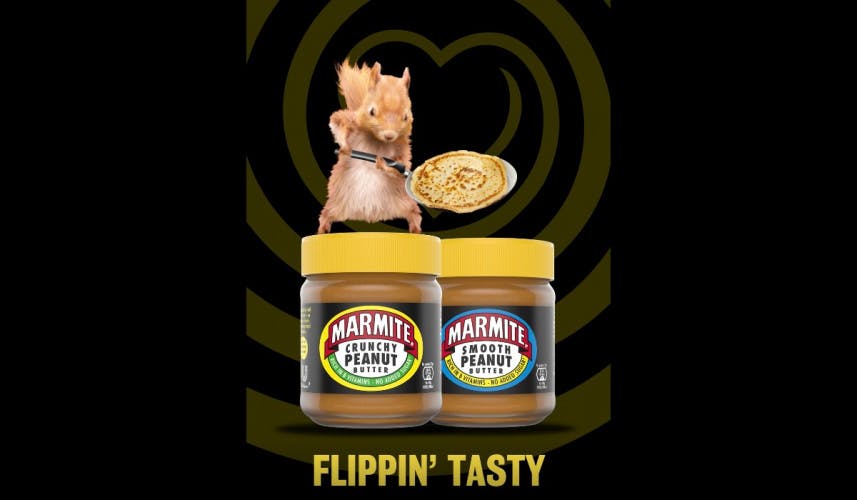 Effectiveness, alongside portfolio and innovation, will play a key role in Coca-Cola’s marketing transformation, according to CMO Manolo Arroyo.