The overall index score fell to 4 points this month having reached a score of 7 in June; the latter, a level not seen for at least 10 years.

In July, expectations for the general economy fell five percentage points to -1 compared to the previous month. And people’s economic fears are even more significant when calculated on a year-by-year basis, with the -1 score ten points lower than in July 2014.

And although the major purchase index – which calculates the likelihood of consumer propensity to spend big on products such as electronic equipment or furniture – score of 11 is 14 points higher year on year, it has decreased five points from June.

Joe Staton, head of market dynamics at GfK, told Marketing Week: “What we are seeing is a clear sense of consumers understanding the world around them – they know the issues and they are aware where the threats might come from.

“You get the sense that they have taken appropriate action by putting their house in order.”

He believes that the negative shift in consumer confidence compared to July is partly due to the “potential Grexit melt-down” and “global uncertainty.” 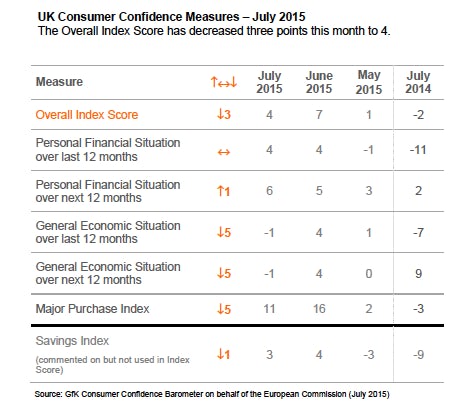 However it isn’t all bad news. On a personal level, consumers remain upbeat about their financial situation for the coming 12 months.

The forecast for personal finances over the next 12 months has increased one point to 6 this month; four points higher than in July 2014.

There is also a strong acknowledgement that personal finances have improved over the last year, with the respective index staying at a score of 4, which is 15 points higher than in July 2014.

Staton added: “Can UK households withstand a rise in interest rates? Yes I believe they can because they have been “toughened up” by the financial crisis.

“Consumers have emerged strong and resilient and have developed coping strategies – from couponing to shopping around for best deals – to help manage and prioritise their everyday finances.”

A poll of over 19,000 British consumers revealed that respondents wouldn’t care if 94% of brands disappeared altogether, according to Havas Media’s Meaningful Brands UK Report 2015.