Consumer confidence improved marginally in December but has now been below -40 for eight months in a row, the first time this has happened since GfK began its records nearly 50 years ago.

The overall index score increased two percentage points to -42 this month, but is far lower than it was a year ago (-15) as consumers battle with sky-high inflation.

Although the UK inflation rate eased to 10.7% in November, according to figures released by the Office for National Statistics (ONS) yesterday, it remains at its highest rate in 40 years, meaning real wages are falling.

The latest ONS data shows the UK’s gross domestic product (GDP) also increased marginally in October, but GfK’s client strategy director, Joe Staton, says “the warning is of a tough road ahead and that the UK is not out of the recessionary woods”. 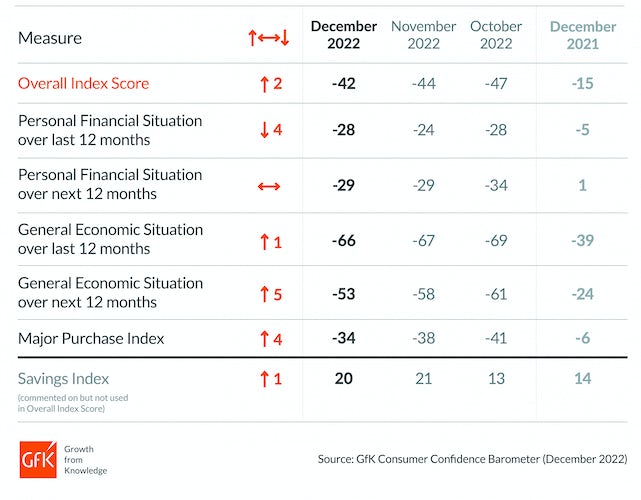 Looking at this month’s GfK Consumer Confidence Barometer, three of the five measure which make up the index score increased in December. However, with all scores remaining deep in negative territory, Staton says it’s “not the winter warmer we’d like”.

People’s view of the general economic situation over the coming 12 months increased by five points to -53, while their impression of the economy over the past year increased one point to -66.Les Binet: Optimising price is the first frontier in the fight against inflation

Meanwhile, the major purchase index, which indicates how likely people are to buy big ticket items, has increased by four points to -34.

However, consumers’ outlook for their personal finances over the coming 12 months, which Staton describes as the “key metric” as we enter a new year, remains flat at -29, far lower than the score of 1 in December 2021.

People’s view of their finances over the past 12 months, meanwhile, has dropped by four points to -28. 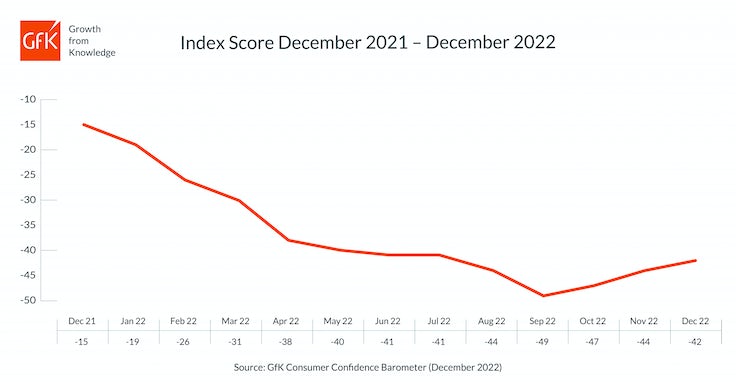 “It’s as if consumers are accepting the economy will recover but feel that their personal circumstances will not,” Staton tells Marketing Week.

“Will 2023 bring better news? We all hope so but marketers will need to hold fast by keeping their finger on the consumer pulse as they have been doing, showing empathy wherever they can, and rewarding brand loyalty.”

Staton warns a rebound in consumer confidence is not likely any time soon as concerns around our economic future “remain acute”.

“As we enter the festive season, the overall index score is still depressed and, with scant seasonal joy at present and no immediate prospect of fiscal good news, it is unlikely we will see a rebound in confidence anytime soon.” 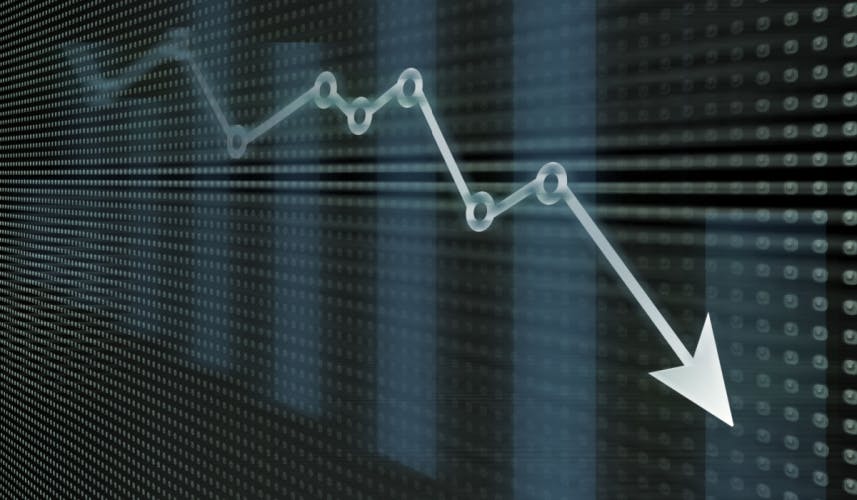 Marketing Week has identified the key opportunities and challenges that will shape marketers’ roles in 2023. As well as flagging what we think marketers should be spending time and money on next year, this is also a commitment from us to focus on these topics.