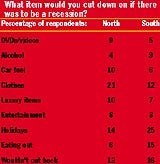 Are we heading towards a recession? Last week the Bank of England cut interest rates by 0.5 per cent. Was that a signal that we are in trouble or simply a reaction to the situation in the US? Each day we read about more job losses and few marketing departments and agencies have escaped redundancies. But consumers appear to be oblivious to all of this.

Back in August we used OMD Snapshots to find out if people felt we were heading towards a recession. At the time, the results showed that only a third of the population believed the UK was on the brink of a recession. Over 60 per cent of respondents agreed that the media was talking up recession. Another sign that consumers were not taking too much notice of recession rumours was that 86 per cent claimed they were not cutting their spending.

After the events of September 11 there is even more talk of economic slow-down. So, what effect would this have had on consumer confidence? We went back to the OMD Snapshots panel to find out whether their views had changed. The numbers who think that we are heading towards a recession has remained the same. The only difference in the results is that ten per cent of those who were undecided in August, now firmly disagree that we’re heading for a recession. The research shows consumer confidence is fairly strong, with only 14 per cent stating that they have begun to cut back on spending.

This is encouraging news for retailers in the run-up to Christmas, especially as many consumers will be saving on their mortgages. This evidence that consumers are not buying into the doom and gloom should also spur advertisers to invest in their brands.

The Profit Impact of Market Strategies (PIMS) study demonstrates the benefit of continuing to advertise during recession, and companies that have cut back on advertising in a recession lost some of their market share. The depressed media market provides opportunities for advertisers to capitalise on the feel-good nature of consumers. In the words of Arthur Koestler, “if the creator had a purpose in equipping us with a neck, he surely meant us to stick it out.”