Most consumers have not yet bought into the hype surrounding wearable devices, according to research seen exclusively by Marketing Week. Wearable technology is set to be one of the hottest trends at Mobile World Congress this week, with a host of brands unveiling new devices, yet 61% of UK adults say they would not buy one.

The survey of 2,000 people, carried out by One Poll and commissioned by experiential agency Fizz, reveals that 37% of consumers believe they have no need for a wearable product, while a further 15% claim wearables are “a fad”. Despite the wide availability of wearable technology, including fitness-tracking wristbands and digitally connected sports tops, Fizz founder Jill Pinner believes the concept of wearable technology is alien to many people.

“Companies are relying on their brands and the premise that just by bringing something out, people will buy it,” she suggests. “Unless people are heavily into fitness, they need to be told why they need these things.”

Market research group CCS Insight has forecast that global wearables sales will hit 135 million units in 2018, up from 9.7 million in 2013. However Google’s recent decision to stop production of its flagship wearable product Google Glass demonstrates the difficulty of launching a new concept device for the mass market. Marketers will learn more about the mainstream appetite for wearable technology next month, when Apple’s first smartwatch goes on sale.

According to the Fizz research, 41% of respondents would feel more inclined to buy wearables if they could touch them or try them on first. In addition, 31% said that in-store demonstrations would encourage them to make a purchase. Pinner claims that electronics retailers are not making wearables sufficiently prominent in their stores and that staff often lack the necessary training to advise shoppers about the technology.

“Stores are not making the best use of their space,” she adds. “There needs to be better marketing of wearables online, to help people that are researching these products, and that needs to dovetail with the experience in-store.” 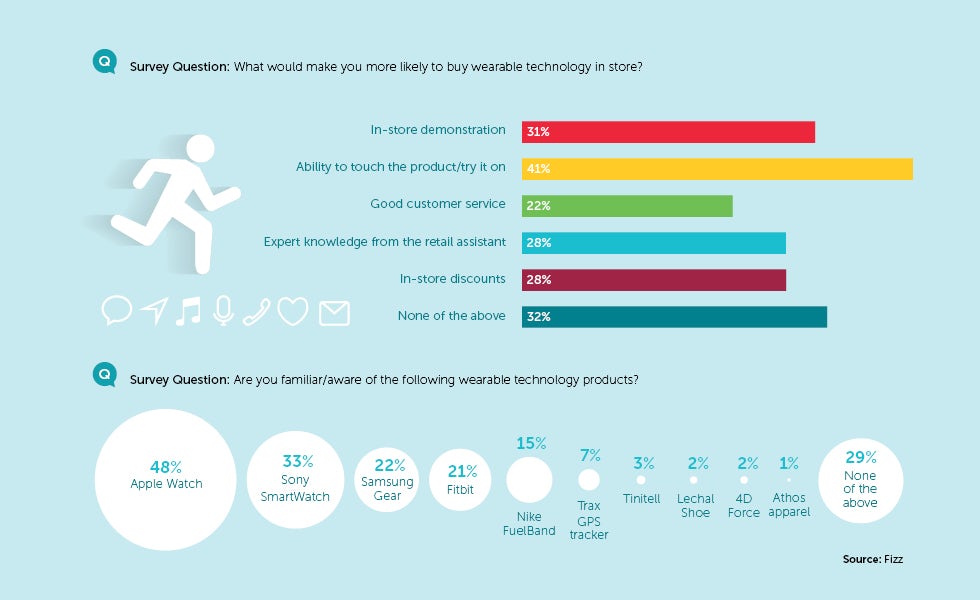 The study shows relatively low levels of prompted brand awareness across the most popular wearable products, with just 33% of respondents stating they have heard of the Sony SmartWatch. Awareness is even lower for Samsung Gear (22%), Fitbit (21%) and Nike FuelBand (15%), while the results drop further when respondents are asked to cite how the products work or what they are used for.

A significantly higher proportion of people (48%) claim to have heard of the Apple Watch, despite the device not yet being on sale. This highlights the huge pull of the Apple brand and the product’s potential to raise the public’s awareness of wearables generally. Rival tech giant Google also announced its intention to become a key player in the wearables marketplace last year with the launch of the Android Wear operating system.

The health and fitness functions of wearables are continuing to advance as a result of improving sensor technology that enables users to track biomarkers like heart rate, sleep patterns and nutrition intake. However the technology also has a bigger part to play within the ever-expanding ‘internet of things’ by offering heightened levels of personalisation and connectivity across appliances. Smartwatches, for example, provide users with the potential to play films on their TV or switch on their home thermostat by simply pressing an app on their wrist.

A recent report by Econsultancy identifies these growing applications of wearable technology, noting that “its impact is not restricted to a single market or a single aspect of people’s lives, but rather like digital it is legion”. It also suggests that one of the most compelling reasons for using wearable technology is the opportunity for more seamless integration between the online and offline worlds.

However the Fizz survey suggests that consumers are reticent about spending large sums on wearable products, with 25% willing to pay no more than £50 for a device and a further 30% ready to go up to £100. The results reveal a big split across the genders, though, with 32% of men stating they would pay more than £150 for a wearable product versus just 19% of women.

Fizz’s Pinner argues that technology brands should develop more coherent marketing messages in order to communicate the benefits of wearable technology to a wider audience. “So far it has come in dribs and drabs, when really we need a big bang [campaign],” she says.

The downfall of Google Glass is down to one thing – it was an ugly product that made anyone wearing it look stupid. Its marketing, however, was immaculate with a seamless blend of social media and more traditional PR.