Just five years ago, consumers were yet to discover the convenience of the ebook reader and the tablet market was in its infancy. But this month at the annual Consumer Electronics Show in Las Vegas, about 80 new tablet devices were announced, such as the Motorola Xoom, the BlackBerry PlayBook as well as devices from Dell and Toshiba.

Industry experts now predict that 2011 could be the year of the tablet, while the second wave of YouGov’s Tablet Track study certainly confirms the ereader market is fast becoming mainstream.

Of the 4,537 UK residents who took part in this survey by YouGov, 802 are tablet owners and 849 own ereader devices. The study, seen exclusively by Marketing Week, shows that 64% of the iPad owners are male compared with 57% of Kindle owners. However, future purchasing attitudes indicate that the iPad will begin to appeal more to female buyers, says Marek Vaygelt, head of consumer, technology and telecoms consulting at YouGov. He adds that women will continue to support the growth of the ebook market because females tend to read more than men. 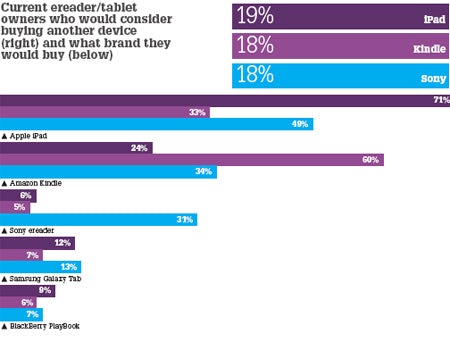 YouGov’s Vaygelt says that despite Sony Readers being the first to the market, they don’t seem to resonate with consumers in the same way as Amazon’s Kindle. “From the data that shows how often they are used, it seems that a lot of owners have them gathering dust on shelves,” he says. But despite this, Sony is still one of the most popular brands in this survey.

Vaygelt adds that although the market is growing, the stronghold appears to be in the hands of iPad and Kindle. Brands such as BlackBerry and Samsung, he claims, do have the benefit of existing strong user bases from their mobile businesses, but start-up entrants could find it difficult to attract the masses.

That said, a diversity of brands takes into account different user groups and price points, according to Vaygelt. “I think there will be different products for different groups of people,” he says. “I can’t see people in their 40s and 50s reading books on their smartphones but I can see them reading from Kindles.”

Cost is currently a barrier to buying a tablet with 35% of survey respondents saying they aren’t worth the money. Of those, 31% say that they would consider buying a tablet if they retailed for less than £100, while 25% say between £100 and £150 is an acceptable cost. However, 19% say they wouldn’t purchase at any price.

This indicates demand for more quality budget lines in this market. Last year retailer Next launched a branded device similar to the iPad for £180 in an attempt to appeal to a more cost-conscious consumer. But while the price was favourable to many, a large number of reviewers panned its performance.

Vaygelt adds: “I don’t think the iPad would drop to the £100 mark that many people say they would be willing to pay, but there will be other tablets coming onto the market at this price range,” says Vaygelt. “The iPad market is strong, but at a price of £500 there is a limit to it.”

The wi-fi version of Amazon’s Kindle is currently priced at £111, which Vaygelt says makes it more accessible to a wider market. Amazon has yet to release a colour, video-enabled Kindle model, although it is tipped to do so this year, meaning it could open up a new world of magazine and newspaper apps for the platform.

Meanwhile, Google’s potential move into ebooks this year could have an unprecedented impact on the market, Vaygelt predicts. “My feeling talking to publishers is that they feel greater warmth towards Google than Amazon. Google engages with the publishing industry but Amazon keeps it at arm’s length,” he claims.

The surge in tablet ownership, whether exclusively for reading or for a range of purposes, is also opening up greater opportunities for brands to engage with consumers through content delivery and sponsored content strategies.

Vaygelt predicts: “There is a lot of potential for interactive advertising. There are some interesting apps and books, with interactivity of a whole new different level. People at the innovative end of the market will be making money quite quickly.”

The Frontline: We ask marketers on the frontline whether our ’trends’ research matches their experience on the ground

The majority of Sony Reader users are currently female and between 34 and 45 years old, which links to YouGov’s observation of women being more likely to read than men. Interestingly, it’s completely different to the typical Sony customer for, say, a music player or laptop.

People who use a Sony Reader typically tell us they chose it over a Kindle or iPad for two reasons. The first and largest group want the freedom to choose where they buy their ebooks from or to borrow free from a library.

The second most common group is students who want to be able to load their own documents and study guides, and mark their documents directly on the ereader. This is not possible on many other devices.

There is still a lot of education to do as most customers haven’t seen or touched an ereader yet. Getting that across wherever we can is far more important than shouting about reading ebooks on mobile phones or driving prices through the floor.

The actual number of ebooks sold is difficult to pin down, given that not all retailers disclose their figures, but it’s fair to say the UK is one of the fastest growing markets for digital reading. We expect the hardware side of the business to grow over 100% year on year in 2011, and that’s just in the UK.

Bruce Fair
Managing director
Kelkoo
Our research shows that sales of ereader devices in the UK will grow by 209% in the next year, rising from 68,000 to 210,000.

Ebooks currently represent just 0.8% of the total book market in the UK, equivalent to £40m of the UK’s £5.2bn book industry. But by 2013 market share is forecast to grow to 10%, with consumers expected to purchase 86.8 million ebooks over the next three years.

With consumer appetite for ebooks increasing, sales of ereaders in the UK are also predicted to increase to 1.3 million over the next three years.

Although ebooks aren’t currently anywhere near as popular as printed books, the recent price war on ereaders, combined with the launch of a plethora of devices fit for purpose, such as the third generation Kindle, Samsung Galaxy Tab and iPad, should act as a catalyst to boost consumer interest, as illustrated in YouGov’s study.

Alex Ingram
Ebooks buyer
Waterstone’s
We first launched the Sony Reader in store in September 2008 and the next generation Sony Readers in September 2009, and now sell a range of devices, including the Elonex and the iRiver, to meet the demands of different users, as YouGov mentions.

We have now sold more than 1 million ebook downloads and are now working on new ereading applications, which will launch in the coming months.

Customers have maintained a preference for ’eInk’ format devices because they offer a reading experience close to regular paper and ink. That said, we’re increasingly seeing varied ways of reading emerge, such as tablet PCs and smartphones. With this in mind we’ll mirror our range and selection to meet the demands of our customers.

Our customers are diverse but a key segment are aged 45 and over who read six or more books a year.

It is notable that in the area of large print reading, the ebook market appears to be dominant, certainly among our customers, and provides a breadth of offering far better than that seen with physical books. 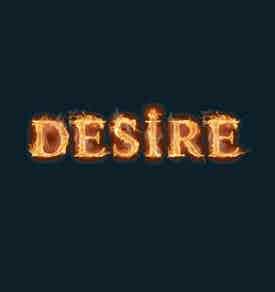 Thou shalt be coveted: A study shows that brands which kindle desire from consumers perform best financially – and it is not just aspirational designer goods that inspire this response. Here’s how to fan the flames of desire for your brand.

Brands are being drafted in like superheroes as part of the coalition government’s Big Society agenda to develop more partnerships with business, but will it work? By Lou Cooper