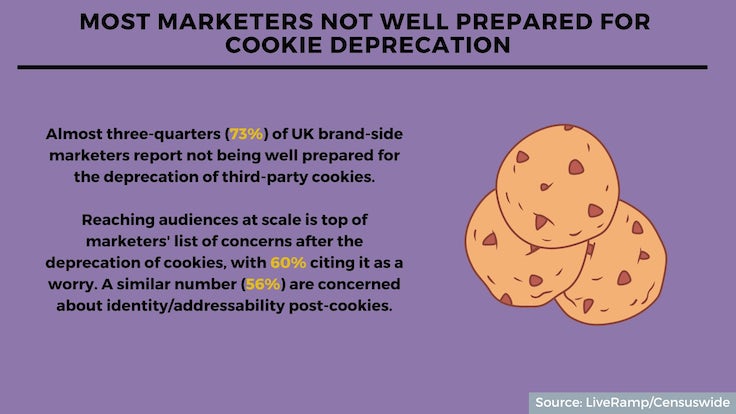 Almost three-quarters (73%) of UK brand-side marketers report not being well prepared for the deprecation of third-party cookies.

Reaching audiences at scale is top of marketers’ list of concerns after the deprecation of cookies, with 60% citing it as a worry. A similar number (56%) are concerned about identity/addressability post-cookies.

Other concerns include the frequency capping of ads (56%) and measurement (50%).

More than seven in 10 (72%) marketers plan to spend more on the open web after third-party cookies are deprecated. 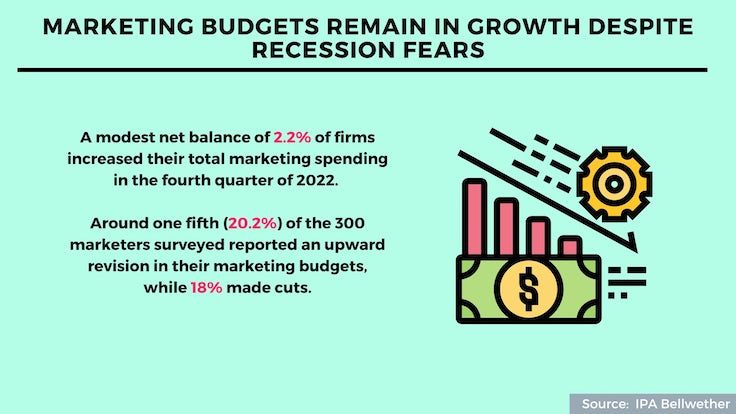 UK marketing budgets continued to grow in the last three months of 2022, despite high levels of pessimism as marketers face a recessionary 2023, finds the latest IPA Bellwether report.

A modest net balance of 2.2% of firms increased their total marketing spending in the fourth quarter of 2022. Around one fifth (20.2%) of the 300 marketers surveyed reported an upward revision in their marketing budgets, while 18% made cuts.

Despite gloomy macroeconomic predictions for the year ahead, respondents indicated the intention to maintain increased marketing spend throughout the year. Almost four in 10 (39.5%) of the firms surveyed expect marketing budgets to be higher in the 2023/24 financial year, with just 15.3% expecting spending cuts.

This means a strong positive net balance of 24.2% expect marketing budgets to grow this year, suggesting firms are protecting spend despite economic concerns.

Unlike the previous quarter, the last three months of 2022 saw a net balance of 4.4% of companies increase main media spend. The third quarter had seen a net balance of -3.1% make cuts in the category, including spend on TV, radio, out of home and online. 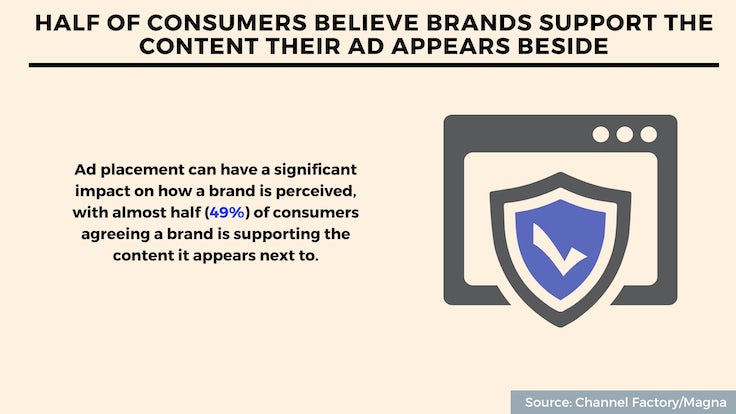 Ad placement can have a significant impact on how a brand is perceived, with almost half (49%) of consumers agreeing a brand is supporting the content it appears next to.

For younger consumers in particular, the content a brand’s ads run against have an impact on purchase intent. Purchase intent decreased by 7% for Gen Z and 5% for when an ad ran against questionable content versus standard content.

In a B2B environment, brands should be even more careful about ad placement as the research finds 45% of respondents disagree with the appropriateness of B2B financial ads beside questionable content. 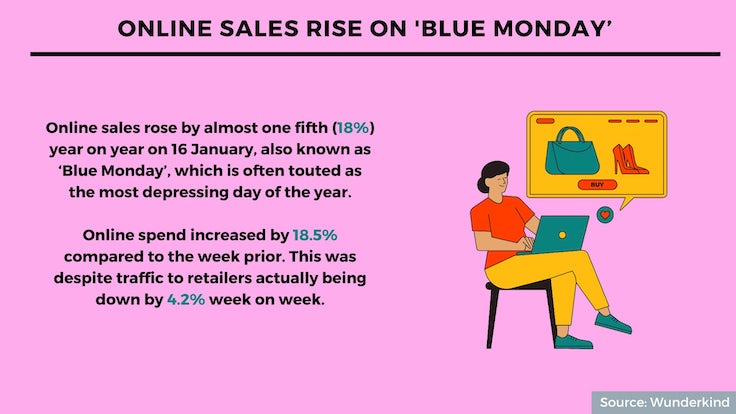 Online sales rose by almost one fifth (18%) year on year on 16 January, also known as ‘Blue Monday’, which is often touted as the most depressing day of the year.

While the decision to dub the third Monday of the year as such was the brain child of a travel brand, it seems many consumers did decide to indulge in retail therapy on the occasion. Online spend increased by 18.5% compared to the week prior. This was despite traffic to retailers actually being down by 4.2% week on week.

Another factor in the sales uptick may have been Blue Monday deals offered by some brands and retailers online. The research also finds customer engagement rose on this date, with opens on emails from brands and retailers up 11.3% week on week, potentially as consumers kept an eye out for deals.

“While Blue Monday does not have the same level of awareness as better known discounting days such as Black Friday and Boxing Day, it is gaining momentum with retailers and consumers alike as shoppers treat themselves to pick-me-up purchases,” says Wulfric Light-Wilkinson general manager EMEA at report author Wunderkind.

“By engaging in smaller, emotionally-driven sales events, retailers can surprise and delight their loyal customers with flash deals and discounts and, at the same time, acquire new shopper data to inform campaigns later in the year.” 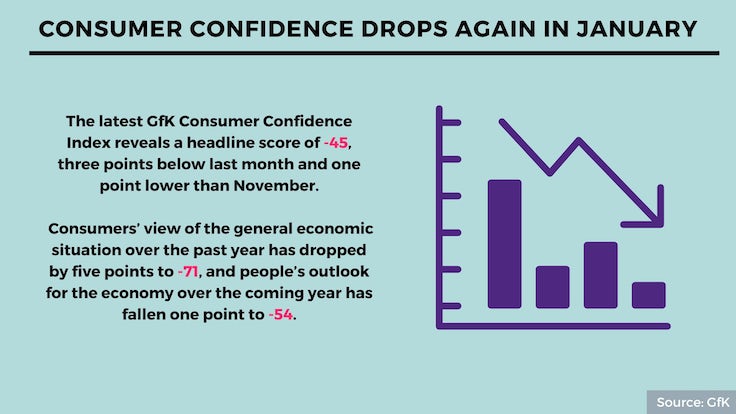 Despite a slight uptick in December, consumer confidence has again fallen this month. The latest GfK Consumer Confidence Index reveals a headline score of -45, three points below last month and one point lower than November.

The major purchase index, an indication of people’s likelihood to buy big ticket items and one of the five key measures that make up the overall score, has fallen by six points to -40.

Meanwhile, consumers’ view of the general economic situation over the past year has dropped by five points to -71, and people’s outlook for the economy over the coming year has fallen one point to -54.

“You have to go back to the financial crisis period October 2008 to July 2009 to find worse scores on the economy,” GfK client strategy director Joe Staton tells Marketing Week.

Consumers’ view of their personal financial situation over the past 12 months also declined by three points to -31.

The only measure to increase in January is people’s expectation for their personal finances over the coming year, which increased by two points to -27. However, this is still 25 points lower than the same time last year. 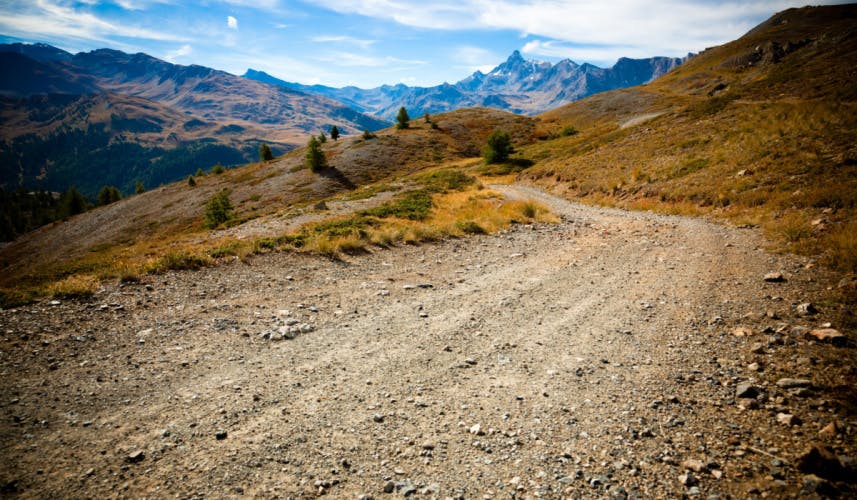 Marketers are being urged to take “centre stage” in helping brands understand consumers’ changing needs as the cost of living crisis continues to bite.