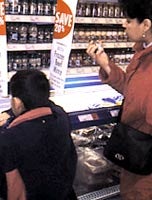 Sainsbury’s and Tesco last week announced that they are to launch ranges of ready-made packaged foods aimed at children. Meanwhile, the spoilt-brat TV cartoon series South Park has licensed a range of meat products aimed at the young.

Aiming products at children is always risky. These latest launches have been criticised not so much for targeting children, but for getting them hooked on unhealthy fare.

Some see it as yet another nail in the coffin of fresh foods and home cooking, while the producers see it as simply responding to demand.

It is a fine line between encouraging children’s “pester power” and ensuring that the products on offer are actually good for them. There have been mixed reactions from food pressure groups as to how responsible the major chains are being.

Sainsbury’s says its range has been developed to deliver great taste with improved nutritional quality. The range has been in development for 12 months under “strict nutrition criteria”, including restricted colourings and preservatives, and controlled fat and salt levels.

Sainsbury’s innovations manager Simon Kilgmour-Miller says the company is well aware of the problems of pester power and getting children to eat a balanced and healthy diet.

Sainsbury’s expects its new range to be the tenth-largest brand in its stores, superseding brands such as Persil and NestlÃ©. It is the biggest new product project the chain has undertaken with the target group of young families with threeto ten-year-old children, which make up 28.3 per cent of the grocery market.

The company has conducted extensive research and Kilgmour-Miller says 75 per cent of parents have a problem with what their children eat.

He says Sainsbury’s new range is about giving parents a choice. The store has worked hard to make sure the range of 250 products to provide parents with an option of filling a lunch box with healthier food, he adds. With products in the sweets, biscuit and cake sector, the company has given portion control back to parents by individually wrapping items.

He says that, ultimately, both parents and children are targeted by the range, but Sainsbury’s does not want to deliberately promote pester power. The range will be priced at a similar level to products already on the market, despite many of them using organic produce, which is generally more expensive.

Kilgmour-Miller says Sainsbury’s has tried to address an important issue, but ultimately it is about giving parents a choice. If parents want branded products it is up to them.

Sainsbury’s range has been “applauded” by the Hyperactive Children Support Group (HACSG), which says many ingredient lists on packaged foods read like the contents of chemistry set.

HACSG London office spokes man Nick Giovannelli, says in an ideal world everyone would be living on a farm, eating organic meat and vegetables, and drinking spring water. But such a world is not the reality. Many young mothers don’t even know how to cook.

Giovannelli says hyperactivity in children is a growing issue with an estimated 600,000 school children suffering from the problem.

“More and more children are chemically sensitive. Although we would prefer children to eat homecooked food, it is preferable they eat products such as the Sainsbury’s range, which has been developed with reduced additives.”

The Tesco range, to be known as “Kids @ Tesco”, will feature about 20 products, mainly ready-made meals aimed at parents who want to give their child a balanced meal.

A spokesman for Tesco says the range was brought about by customers wanting to give their children a balanced meal but not having the time. This is a healthier alternative to a takeaway, he says.

Tesco has added vegetables to the meals, so that children will eat the correct diet, while maybe not realising it.

But not everyone approves of these packaged products. Mary Whiting, food writer and co-author of the Nursery Food Book, sees it as yet another deliberate act by the food industry to “de-skill women” in the kitchen and create a culture where people don’t know how to cook even the simplest of meals.

“There is very little profit in raw ingredients.” She says the price charged for potatoes as a raw product is minimal compared with the prices charged when a process, such as making crisps, is applied.

The food industry has created this market itself she says. It started years ago when processed baby food hit the shelves.

“The food industry invented baby food and now it’s trying to invent toddler and children’s food. These products cannot be freshly made. The level of vitamin C has to be low, the fibre is low – they will not be made from high-quality products.

“The industry is training the young palette from an early age to accept processed commercial food. I grew up on home-cooked food and I can taste, even smell commercial food,” she says.

Whiting says by starting children on processed foods at such a young age the food industry is making sure the taste is acceptable as they grow older.

Jeanette Longfield, a co-ordinator at food pressure group Sustain, says her “heart sank” when she first heard about the new food ranges.

One of her main concerns is that the ranges are aimed at children. “It is not fair to target children. They are being targeted so much already with things like sweets and crisp,” she says.

A major problem with the diet of both children and adults is the lack of fresh vegetables that are eaten.

“If these ranges include an increase in fruit and vegetables I will be gob-smacked,” says Longfield.

She agrees that there is a place for ready-made meals, partly because people are too tired to cook from scratch but says retailers should be looking at making these meals to a higher standard.

“I suspect there are technological problems with the meals having to be pre-cooked and frozen to keep them nutritional, but the industry must be able to think of ways to better them,” argues Longfield.

A spokesperson for the Food &amp; Drink Federation says there is a general perception that children should be eating a more balanced and healthy diet and these lines seem to be responding to that. She says the federation is pleased to see retailers offering more choice and tailoring lines in a more nutritional way.

Whether parents like it or not, children are an important target consumer group for the big retailers and brand owners.