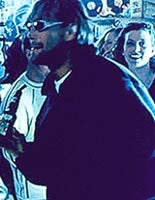 Coors says that unlike its US rival, Coors Light 4.5%, which is being tested in Scotland and Ireland, will not be marketed as a low-calorie lager.

“In the US it is known as Coors Light. The 4.5% was added to the name over here to emphasise that it is a full strength lager and to avoid the stigma associated with low calorie lager,” says a Coors spokesman.

TV and poster advertising created by Banks Hoggins O’Shea/FCB in the test markets use the strapline “Full strength goes down easy”.

“Our proposition is not calorie-focused and any other brand withdrawal from the UK, due to low calorie issues, will not affect our position,” says Ian Ronayne, commercial director of Coors Brewing in the UK and Ireland.

Anheuser-Busch this week confirmed it is withdrawing Bud Light from the UK after only two years, following disappointing sales.

Despite a £5m TV campaign by BMP DDB, Bud Light failed to capture its target market of 18 to 34 year-old males.