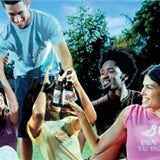 Coors Brewers, the owner of the UK’s best-selling lager brand Carling, has rejigged its marketing and sales departments with two new appointments.

Rob Borland has been appointed director of marketing – portfolio. He will be responsible for the Coors Fine Light Beer, Grolsch and Sol lager brands as well as the company’s ale portfolio. He replaces David Preston, who moves to on-trade sales, responsible for London, Scotland and Ireland.

Borland joins the UK marketing team from parent company Molson Coors in the US. He will be based at Coors’ head office in Burton-on-Trent and will report to marketing director Simon Davies.

Holberry has been sales director for Coors on-trade since 2003. Prior to this, he was responsible for the company’s off-trade sales division.