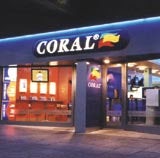 He replaces Nick Mills, who left the company two months ago to join Racing UK as marketing director.

Miller is expected to take over the role at Coral, which is the third-largest bookmaker in the UK after Ladbrokes and William Hill, in August. He will be responsible for all marketing across the chain and will report to Coral commercial director Simon Longbottom.

Ladbrokes is now seeking a replacement for Miller, who has been with Ladbrokes since 1991 and has held a number of senior marketing positions. He joined as head of marketing for Ladbrokes’ now- defunct bet.co.uk website (MW October 7, 1999). He has also been head of marketing for the UK and Ireland, and his most recent role was general manager of advertising and promotions for egaming and telephone betting.

His predecessor at Coral, Mills, joined the fledgling television station Racing UK, which was set up by 30 of the UK’s top racecourses in April this year. He will be responsible for overseeing the channel’s transition from a free-to-air to a paid-for service.