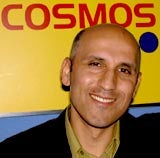 Ali Naqvi joins the company from National Express, where he was sales and marketing director for train operators WAGN and LTS.

At Cosmos, Naqvi will report to managing director Paul Jolliffe and have responsibility for its North American and Tourama brands, as well as long-haul tailor-made specialist, Distant Dreams, and direct-selling operator Archers Direct.

Cosmos says the creation of the new role reflects the growth in the escorted coach touring market.

Naqvi, who will take up the position immediately, has held several marketing roles within the travel and leisure industry, having worked for English Heritage, Pepsi Trocadero and the Science Museum.

“Tour operators are coming to realise that this sector can offer much higher profit margins than other, mass market sectors.”