As the cost of living spirals consumers are adapting their behaviour to cope, with many prepared to switch to cheaper brands, reduce spend on non-essentials, drive less and turn off the heating in order to save cash.

Indeed, more than a third (38%) of shoppers say they have already started to swap their tried and trusted brands for supermarket value ranges or cheaper alternatives. A further 19% say they will ‘definitely’ do this as the year progresses, and another 28% will consider it, according to research by BritainThinks shared exclusively with Marketing Week.

Just 4% of consumers say they will ‘definitely not’ swap their usual brand for cheaper products or budget ranges, suggesting value products will become “increasingly important” for consumers in the coming months.

Subscriptions are another expense people plan to cut back on, with a quarter of people (24%) already cancelling services like Netflix and Spotify, as well as club memberships, and a further 14% saying they will definitely do this. Just 10% of people have ruled out cancelling subscriptions if money is tight.

Netflix is already seeing a slow down in subscribers after losing 200,000 subscribers in the first three months of this year. The streaming giant now has 221.6 million subscribers, down from 221.8 million last quarter. And while it did lose 700,000 customers as a result of suspending services in Russia, subscriber growth has slowed regardless, putting it far behind the 2.5 million new customers Wall Street analysts had been expecting it to add in the first three months of the year.

Most people (61%) are optimistic they will still be able to afford the essentials over the coming year but far fewer (38%) feel confident they’ll be able to continue spending on luxuries.

In the face of significant and unavoidable cost increases for the essentials, the public are having to find savings in all areas of their lives. This is likely to create a challenging environment for premium brands.

A third (33%) of people have already cut back on large expenses like holidays abroad, with another 21% planning to imminently. Meanwhile, 33% have cut their spend on non-essentials like eating out, with 24% about to and 28% considering it.

People also plan to save money by driving less, with 35% already doing this and 19% saying they definitely will, and by turning off the heating or reducing their use of appliances (48% already have and 22% definitely will).

Charities look set to see another knock to donations too, with 23% of people already cancelling or reducing the amount they give, another 11% planning to and a further 28% considering it.

“In the face of significant and unavoidable cost increases for the essentials, the public are having to find savings in all areas of their lives. This is likely to create a challenging environment for premium brands, with increasing numbers of consumers eschewing luxuries to make ends meet,” BritainThinks research director, Max Templer, tells Marketing Week.

“In order to mitigate the impact of cost of living increases the public are cutting back on expenses big and small. [Some] 53% of the public are considering delaying life events and just under three in five say they are already or will definitely be buying more from value ranges in the coming months.”

However, despite consumers’ concerns about the rising cost of living, most do not expect to get any support from major retailers.

Just 18% of the public believe the UK’s top retailers will make products more affordable in response to the crisis.

The big four supermarkets have all outlined cost cutting measures and pledged to support consumers in recent months, but this doesn’t appear to be hitting home. Just 6% of people say they have ‘a lot’ of trust in Tesco, Sainsbury’s, Asda and Morrisons’ ability to keep costs down.

This is despite both Tesco and Sainsbury’s extending their Aldi Price Match initiatives, and Sainsbury’s introducing fresh price cuts on 150 high volume products last month.

Tesco CEO: Marketing is ‘more important than ever’ amid cost of living crisis

Meanwhile, Morrisons confirmed it was cutting prices on more than 500 products last month, with an average saving of 13% across key items including eggs, baked beans and rice, as well as things like nappies and coffee.

And Asda will start rolling out its new value range Just Essentials this month after investing £45m in the offer, which it claims is the largest in the market. It says it has been specifically designed to help “millions of families” manage rising living costs, and comprises 50% more products than the Smart Price range it replaces.

Asda comes out on top by just one percentage point when looking at all positive scores in the BritainThinks research – 44% of people have some level of trust in the supermarket’s ability to make products affordable. Tesco comes in a close second (43%), with Sainsbury’s and Morrisons both on 40%.

Aldi and Lidl both fair better, with 50% of consumers having some level of trust they will help make products more affordable in response to the rising cost of living.

Templer adds: “Our research also shows that expectations of brands to make products more affordable is relatively low. This, paired with the clear need to cut back on costs among the public, suggests a potential opportunity for brands to strike out and outperform consumers’ expectations.”

Overall, the vast majority of consumers (91%) are concerned about the rising cost of living, with nearly two-thirds (58%) very worried about prices getting out of control.

This is reflected in the latest data from the British Retail Consortium and KPMG, which shows a 0.3% drop in sales for the four weeks to 30 April, compared to an increase of 51.1% in April 2021.

Already, 48% of people taking part in the BritainThinks survey say they have seen the cost of food and groceries at supermarkets increase, with 38% saying the same for items they buy at local shops.

Unsurprisingly, 62% have seen their energy bills rise, while 22% believe they are paying more for alcoholic drinks and takeaways, and 20% saying they are paying more at restaurants. More than a third of people (35%) have also noticed a rise in travel and transport expenses.

However, consumers’ concern about the cost of living are not universal in the UK. BritainThinks has identified five distinct typologies within the population with common attitudes toward the crisis.

There is a potential opportunity for brands to strike out and outperform consumers’ expectations.

While just 6% of the population are very optimistic about affording both the luxuries and basics and are not considering any behaviour changes in response to the cost of living, another one in three are fairly optimistic.

This fairly optimistic cohort is less likely to have already made changes in general but they are considering adapting certain things to help save money in future. These two groups are more likely to be men, home-owners and either co-habiting or married.

There is also a group made up of around 10% of the population who are already “deeply affected” by the cost of living crisis. They are struggling to stay afloat and are very pessimistic about affording the essentials.

New data shows consumers are already cutting spend across food, eating out and clothing, while analysts expect further cuts to emerge across electronics, holidays and subscriptions. 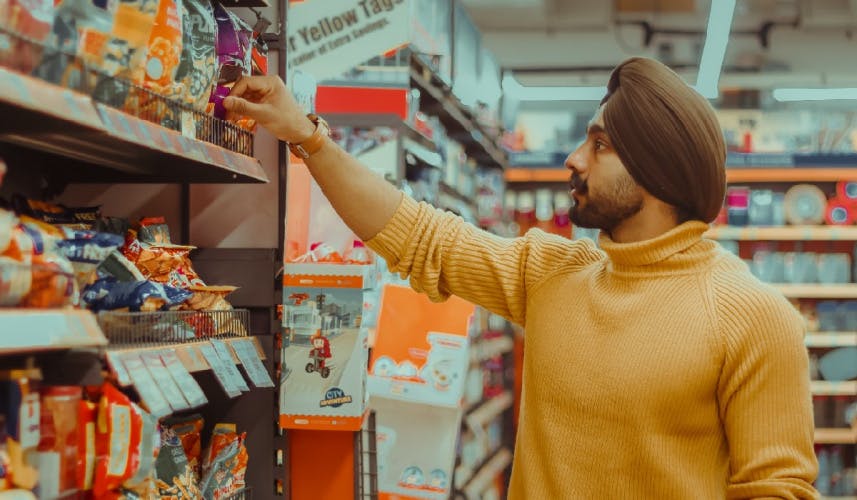 Supermarket own-brand products now account for over 50% of sales, but there remains plenty of room for brands to make their mark on consumers amid the cost-of-living crisis, analysts say.