The report by PageFair and Adobe found there has been an 82% increase in the number of internet users adopting ad blockers on a monthly basis in the 12 months to June 2015. Across Europe ad blocking grew by 35% to 77 million while worldwide use was up 41% to 198 million active ad blockers.

While the proportion of internet users making use of ad blockers is relatively low, at 6% globally, these are some of the biggest internet browsers. In total 14% of global ad spend could be impacted by ad blockers this year, according to the report.

People that access gaming and social media websites are most likely to block ads, at 26.5% and 19.1% respectively. By comparison visitors to health, charity and government or legal websites are least likely.

“Ad blocking behaviour on a website is a function of audience demographics. Websites that cater to young, technically savvy or more male audiences are significantly worse affected,” says the report.

In a survey of 400 US consumers conducted as part of the research, half said they would start using an ad blocker if they felt their personal data was being misused to create personalised ads. A further 41% said they would be tempted if the number of online ads increased, while 10% said marketers inability to target ads would make them consider using the technology.

Just 11% of people said they would never use an ad blocker.

The threat of mobile ad blocking

The report also suggests an imminent threat from mobile ad blockers. While they are yet to have a serious impact, accounting for just 1.6% of ad blocking hits, PageFair’s CEO Sean Blanchfield says the launch of the next iteration of Apple’s operating system, iOS 9, in September and introduction of popular tool AdBlock Plus on mobile could lead to a “collapse” in the internet economy.

“It is tragic that ad block users are inadvertently inflicting multi-billion dollar losses on the very websites they most enjoy. With ad blocking going mobile, there’s an eminent threat the business model that has supported the open web for two decades is going to collapse,” he adds.

The report was compiled by measuring ad blocking hits across PageFair’s client websites.

Ad blocking technology that has proved popular on desktop is coming to mobile. However, brands and advertisers should see this as an opportunity to improve advertising and make it more relevant to customers rather than a threat. 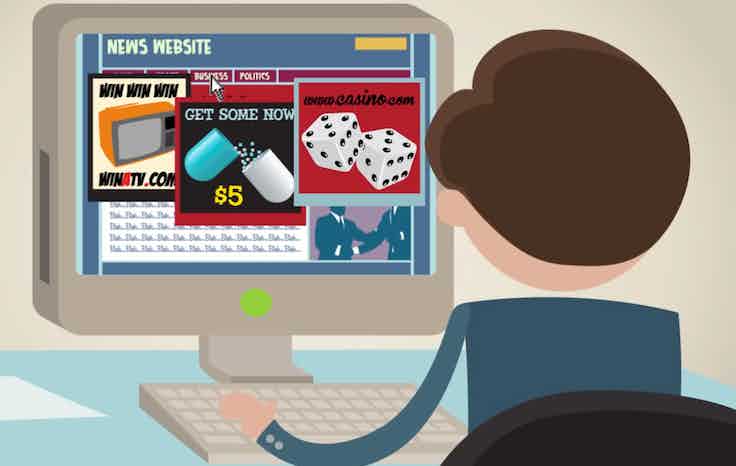 Up to 15% of UK consumers are actively blocking online ads through programmes such as AdBlock according to a new report, suggesting marketers need to do more to ensure their ads aren’t ‘disruptive’ or ‘annoying’.