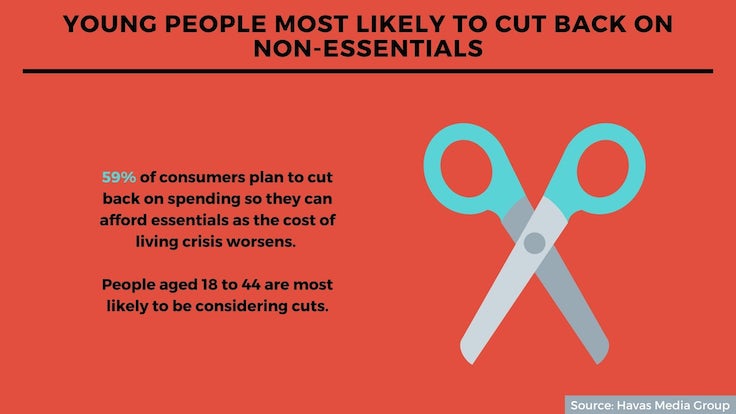 Young people most likely to cut back on non-essentials

More than half (59%) of consumers plan to cut back on spending so they can afford essentials as the cost of living crisis worsens, with people aged 18 to 44 most likely to be considering cuts.

The majority of consumers believe the cost of living crisis is here to stay, with most age groups expecting it to last for at least one to two years.

The research also finds consumers now place more responsibility on brands. Looking at the relationship between brands and consumers across three core pillars: functional benefits (does the product or service deliver?), personal benefits (how brands improve people’s lives) and collective benefits (what’s their role in society?), consumers’ expectations have risen by 63%.

Consumers place particular importance on brands ensuring their goods are priced fairly during the cost of living crisis. Fair pricing saw a three-quarter net increase in the number of people saying it was important to them than before the crisis.

Brands should also work to ensure they help consumers save money, with a 77% net increase in the number of people saying it is more important brands help them save money than prior to the crisis.

Consumers will stop purchasing from brands that mishandle data 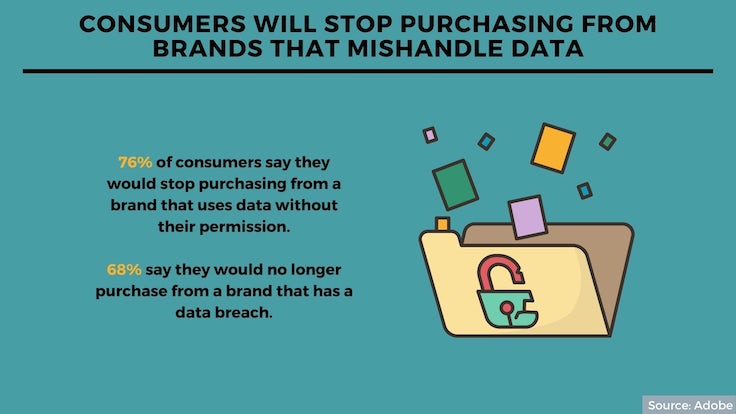 More than two-thirds of consumers say they will stop purchasing from a brand that mishandles their data.

This comes from the Adobe Trust Report, which also finds there is a high level of cynicism among consumers about the mutual benefit of brands collecting their data. Some 71% believe that data collected from digital interactions only benefits the company, not the consumer.

One way brands can look to improve trust is by increasing transparency. The vast majority (84%) of consumers say it is important to them to have choices about how companies use their data. Meanwhile, 86% say transparency about how their data is used, along with choice and keeping data safe are the top ways brands can rebuild trust after a breach.

On the side of businesses, the research finds that just over half (55%) of business leaders say they rank strong data privacy and governance processes as a top priority.

Podcast listening habits formed during the pandemic here to stay 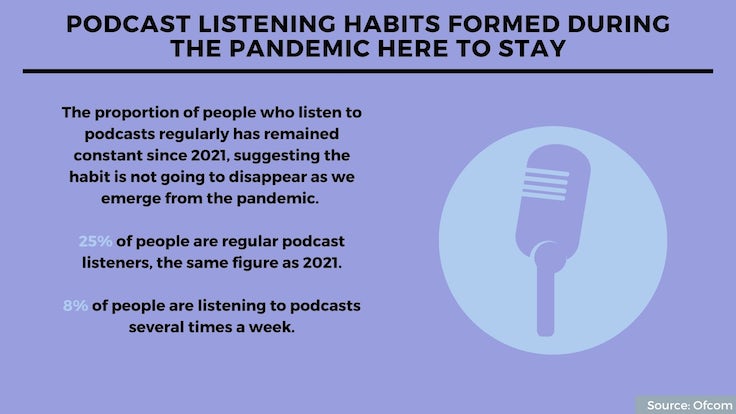 The proportion of people who listen to podcasts regularly has remained constant since 2021, suggesting the habit is not going to disappear as we emerge from the pandemic. One in four (25%) of people are regular podcast listeners, the same figure as 2021.

Podcasts are most popular among younger millennials, with 25- to 34-year-olds being the largest consumers. Across the population, almost one in 10 (8%) of people are listening to podcasts several times a week.

While the podcast habit doesn’t seem to be disappearing, this form of audio consumption may pose a threat to more traditional listening habits. Just over a quarter (26%) of people say they now listen to the radio less as a result of listening to podcasts.

“Podcasts have entered the mainstream. We’re now more likely to listen to podcasts than to listen to CDs, and 19.1 million listen every week,” says Sarah Coles, senior personal finance analyst at Hargreaves Lansdown and co-presenter of Switch Your Money On podcast. 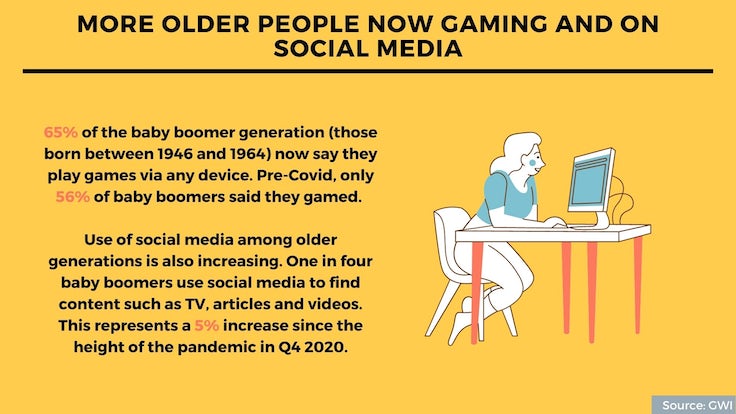 Many of the changes to media habits that happened during the pandemic have stuck, with older consumers keeping up gaming and social media.

Almost two-thirds (65%) of the baby boomer generation (those born between 1946 and 1964) now say they play games via any device. Pre-Covid, only 56% of baby boomers said they gamed.

Similarly, use of social media among older generations is increasing. One in four baby boomers use social media to find content such as TV, articles and videos. This represents a 5% increase since the height of the pandemic in Q4 2020.

However, not all pandemic consumption habits are here to stay, the research suggests that online TV subscription saturation may be kicking in. The average number of streaming services used by consumers has remained static at 2.7, a contrast to the steady rise since Q2 2017.  The number of users saying they’ve paid for a movie or TV streaming service is also starting to plateau.

Short-form video is gaining popularity though. Even among the older baby boomer generation, the medium has grown 5% since the start of 2021. 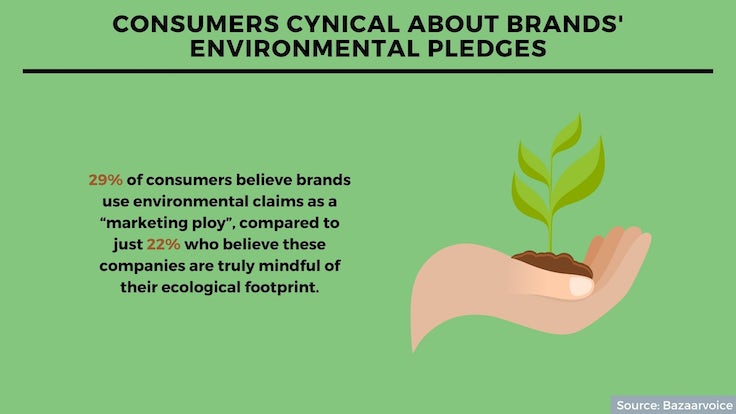 Despite cynicism about the sincerity of brands’ environmental claims, consumers are mindful of the issue, with two-thirds realising fast-fashion has a negative impact on the planet. However, there are obstacles blocking consumers from making more environmentally friendly choices.

Cost is the biggest barrier to consumers making eco-conscious choices. Nearly two-thirds (62%) say the higher price points of eco-friendly products are a barrier. In fact, almost half (44%) say they can’t afford to switch to products that are more sustainable than fast fashion.

The availability of more sustainable products is another stumbling block for consumers making these choices.

One method that brands could use to help consumers overcome these barriers is by incentivising green behaviour. The majority (83%) of consumers say they are more likely to make a sustainable switch if they are offered incentives, such as discounted items for participating in recycling programmes. 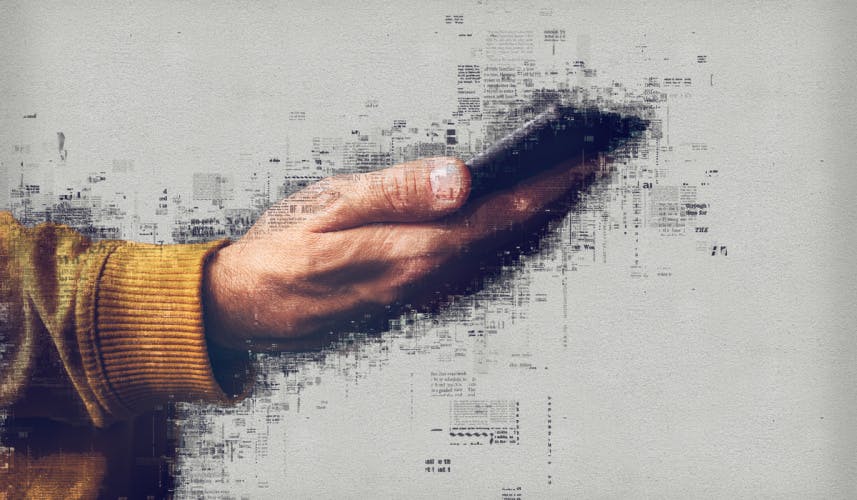 Evolutions in consumers’ values, as well as how they interact with technology today, are among the driving forces behind 2022’s key marketing trends.

Promoting the value credentials of its brands and building in new pricing architecture is enabling P&G to navigate inflation without losing customers.