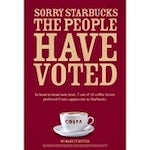 Competitions on three Bauer-owned radio stations (Kiss 101, Key 103 and Forth One) included the claim that “7 out of 10 coffee lovers prefer Costa coffee” but following a complaint from rivals Starbucks, Ofcom investigated and concluded that Costa’s claim was in breached the code regarding sponsorship.

Starbucks said that the tasting trial referred to only one coffee type, cappuccino, and examined no other aspect of coffee retailing. It also argued that the taste test had only been carried out against two other competitors.

Bauer and said Costa both said that advice had been sought on the non-broadcast advertising from the Advertising Standards Authority.

Bauer admitted that the scripts for the competition had been cleared in-house, and substantiation assembled. However, time to include supporting information to qualify the claims on air was not available. The licensees’ websites carried further information and full details of the research

However, Ofcom states: “Costa’s tests were plainly based on a subjective and limited assessment by the test subjects of one coffee drink. Given these limitations of the trial, we do not consider that an unqualified claim such as’ 7 out of 10 … prefer Costa coffee’ could be made without appropriate qualification to the claim itself and accompanying explanatory detail.”

Commenting on the breach, Costa marketing director, Jim Slater, told Marketing Week that it was a “storm in a teacup”.

“The breach only occurred in three of hundreds of stations. The scripts had been approved but the DJs on some of the stations got sick of reading out the small print.”

Slater, who was appointed almost a year ago with a brief to communicate the superiority of the company’s product offering and increase customer loyalty, says the company would “continue to differentiate itself, quantify that differentiation and, in turn, communicate it”, as has been achieved in the ‘7 out of 10’ campaign.

However, the chain reports total sales up 18 per cent as owners Whitbread added 88 outlets this year. “We are in the rudest of health,” adds Slater. “There could be a number of reasons for that, one of which could be our marketing.”

Marks & Spencer executive chairman Sir Stuart Rose says the recession has presented a fantastic opportunity for marketers to prove themselves by finding new ways to engage with customers.

The protracted stand-off between Royal Mail and its employees over jobs, pay and services and the associated strikes has severely dented the postal service’s brand reputation.

The Government has indicated it is in favour of lifting the ban on product placement on commercial TV in the UK, but few are convinced such a move will pay dividends.