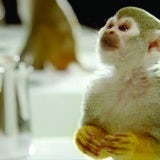 Costa Coffee is launching its first ever TV advertisement titled “Monkeys and Typewriters” tomorrow (7 October), aiming to highlight its superior quality of coffee.

The ad, created by Karmarama, aims to demonstrate the skill it takes to make the perfect cup in an execution that Costa claims will break the mould of conventional coffee advertising. Supporting press activity will run in national newspapers featuring bold, confident headlines stating that ’not all coffee is made equal’ and that Costa is on a ’mission’ to save the world from mediocre coffee. An online campaign will also accompany.

The answer is a resolute no as the film opens on an individual monkey and pans out to reveal a futuristic room filled with monkeys in front of coffee machines. The monkeys are seen tentatively trying to work the machines with a gradual descent into chaos.

Concluding with cinematic shots of a Costa barista hand making the perfect cup of coffee, the advert seeks to illustrate that good coffee is not born from luck but can only be created when hand- made with passion by the highly skilled and trained expert baristas at Costa.

It will premiere at 8:45pm during Coronation Street on ITV1 and will run for 4 weeks across national terrestrial and multichannel in both 60 and 30 second formats and will be accompanied by a print and online executions.

Jim Slater, marketing director for Costa, comments: “Costa is enjoying double-digit like for like sales growth, and we aim to continue this great momentum. Independent surveys consistently prove that coffee lovers prefer Costa, and this TV commercial will help us to explain the reasons why.”