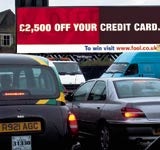 Outdoor companies are bracing themselves for a clampdown on illegal advertising billboards by London borough planning departments, following an accident last weekend.

A woman was taken to hospital after a Van Wagner 96-sheet billboard, which was reinforced with steel, fell off Blackfriars Bridge in London onto her car. She was treated for minor injuries.

Southwark council, which is the planning authority for the site of the accident, is claiming the billboard did not have its permission. In the weeks building up to the accident, the council had a spate of pulling down billboards on the same site that it deemed illegal.

The council denies that during this process it may have loosened Van Wagner’s board.

Now it is likely that Southwark, and several other London boroughs will have a crack down on billboards, particularly on bridges, that do not have planning permission.

A spokesman for Van Wagner says that the accident was a “freak” and that it has launched a full investigation.

This month sees the launch of a new specialist “Model Contract” for website design and maintenance. It has been created jointly by the Incorporated Society of British Advertisers (ISBA), the representative body for UK advertisers; the Institute of Practitioners in Advertising (IPA), the trade body for leading marketing and advertising agencies; and online agency New […]

Euro RSCG London has created TV advertising to promote the Co-op’s conversion of its entire range of own-brand coffees to Fairtrade.

Is the testing system to blame when products such as SC Johnson’s flushable toilet wipes encounter problems soon after launch, or is it caused by the rush to beat the competition? By Daniel Thomas