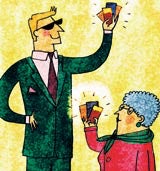 A poet once wrote: “The best things in life are never rationed. Friendship, loyalty, love do not require coupons.” There are a number of things one can infer from this. Firstly, the writer probably never shopped in a supermarket – because the likes of Tesco and Somerfield attach great significance to loyalty and coupons.

Secondly, he or she almost certainly lived prior to 1894 – the year Asa Candler, the drugstore chemist who purchased the formula for Coca-Cola, issued a handwritten ticket offering customers a free glass of his new fountain drink. In so doing, Candler may have launched not one, but two, multi-billion pound industries in a day.

Most people know what became of the erstwhile “fountain drink”. But Candler’s hastily written coupon gave birth to a second industry that has evolved to become one of the fastest growing in UK retail, and is currently valued at about £1.5bn per year.

Until recently, it is fair to say that the evolutionary paths of coupons and vouchers went their separate ways. Coupons became important sales promotion tools that, if you believed the stereotype, were used only by pensioners and cost-conscious housewives to save a few pennies on their groceries. Vouchers, on the other hand, spawned a plethora of offspring such as tokens, gift cards and online currencies and became the cornerstone of employee incentive schemes and reward programmes.

But it has never been easy to distinguish between coupons and vouchers, and their common ancestry ensures clear similarities. For instance, both inspire loyalty more effectively than cash bonuses or straight money-off discounts. Both have suffered from being perceived as boring and downmarket, yet both have continued to confound their detractors by growing in popularity, importance and sophistication.

A generation of business studies students have learned how, at the end of the 1990s, Tesco and Safeway made crucial decisions about the efficacy of customer loyalty schemes. The latter abandoned its scheme in favour of price discounts and was eventually taken over. Tesco stuck to its guns and is now the UK’s most successful retailer.

The importance of the Tesco’s Clubcard is underlined by the fact that today, £50m in vouchers is sent to Clubcard holders every quarter, with redemption rates regularly exceeding 90 per cent. Recent research conducted by NOP on behalf of NCH Marketing Services found that the Tesco Clubcard, along with other reward cards such as Nectar, have raised the profile of coupons as well as their acceptability. An impressive 86 per cent of all respondents (both coupon users and non-users) admitted that they belonged to a reward scheme.

What this demonstrates, says Sheridan Thompson. client service director of Catalina Marketing, the company behind Somerfield’s Saver Card customer loyalty programme, is that coupon-based schemes have a much wider appeal than many people assume – providing the activity is well targeted.

Thompson says, “NOP’s research revealed that low income households are no longer the main users of coupons – nearly 70 per cent of those earning more than £100,000 a year were found to use them. In other words, the modern coupon user is just as likely to be a young, urban, car-driving male as a 60-plus grandmother. For coupons to work as a viable and cost-effective marketing channel, they need to encourage customer retention and shopper frequency.”

The premise behind the Saver Card scheme, Thompson continues, is that providing the end-user engages with the promotion, they will use coupons irrespective of their age or income. He says: “If the customer finds the promotion exciting and personally beneficial, and if the offer is delivered in an appropriate and timely manner, they will respond. In an age when consumers are exposed to vast numbers of marketing messages through different media, it seems that relevant and frequent, behaviour-based coupon promotions could well be the answer. This is certainly true at Somerfield, where 60 per cent of sales have been linked to the Saver Card in its first year of operation.”

Zoe Eastwell, database marketing sales and marketing director at NCH Marketing Services, agrees that consumers are bombarded by different media and that the personal touch of coupons counts for a lot. She says: “Their popularity across so many varied consumer groups is surprising. However, people often feel overloaded by advertising, whereas coupons actually give something back to them, rewarding them for their loyalty.”

It is easy to see parallels emerging between coupons and vouchers – including some of the key things that have underpinned the growth in the voucher and gift card market. Here, the corporate sector in particular is enjoying a period of unprecedented growth – some estimates say by 20 per cent a year. Electronic and paper vouchers have become the currency of employee reward and loyalty schemes – and the reason why vouchers work so well is because they perform a very simple task.

Capital Incentives &amp; Motivation managing director Graham Povey says that what makes vouchers so popular is their versatility and simplicity. “One of the benefits of using vouchers to reward people is that they have an immediate impact. You also work on the principle that choice motivates, which is why shopping vouchers are still among the most popular kind of voucher.”

High street retailers such as Boots, Tesco and a number of department stores have realised the strategic importance of having a mixed portfolio of coupons, vouchers and electronic points schemes. It provides customers with apparent choice and flexibility – yet at the same time it locks the shopper into the brand and raises a very effective barrier to the competition. “Coupons affect behaviour even when they are not redeemed, in that they raise awareness in a similar way to advertising,” adds Eastwell.

But as the coupon and voucher markets become increasingly mature, industry players are looking at ways to differentiate themselves as well as expanding the market. Segmentation is becoming increasingly sophisticated and the products more varied. But one of the key factors enabling coupon-saving programmes to become more relevant has been technology, which has played a crucial part in the continuing success.

In recent years, the huge growth in computer processing power has made information management and data warehousing more affordable. This has enabled companies to put their data records to better use. Catalina’s global network monitors 250 million transactions each week from 200 companies around the world. Having access to this level of customer information, and more importantly being able to interpret and act on the data, means that retailers have the tools to develop focused and carefully targeted campaigns.

Catalyst Marketing group account director Austen Donnelly agrees that focused campaigns are the way forward. He says: “Traditional methods of distributing vouchers to the market are past their use-by date. One of our clients saved £400,000 by no longer being included in voucher books for leading supermarket chains. The company found that 54 per cent of its coupons were not being used on its products at all and that 94 per cent were not being used against the products intended.”

The result, says Donnelly, is that the client has reduced its coupon activity and will now only get involved where targeting is very strong or where product-specific coupons can be used. He continues: “For Catalyst to recommend coupons as a means to drive sales of a client product or brand, we would need to be convinced that the means of delivering the coupon has a proven track record and is highly targeted.”

One thing is certain: somebody out there is developing new methods to reach those carefully defined consumer types. And those methods may well involve the internet: NOP discovered that significant market opportunities exist for electronic vouchers. Nearly two-thirds of those interviewed possessed a home computer, yet only four per cent have used coupons or vouchers found on the internet. “The internet has yet to come into its own as a means of providing consumers with coupons,” says Eastwell. “However, paperless coupons could gain ground as awareness of the medium grows.”

US electronic commerce and payment group First Data Corporation recently established European subsidiaries to open up a new channel to market – the distribution of vouchers via mobile phones. Tony Ragan, marketing and content director at Eposs, the company’s UK subsidiary, explains. “Distributing promotional vouchers via mobile phones is inexpensive and flexible, and it enables marketers to personalise promotions. There are no bits of paper or cardboard cut-outs that have to be printed and distributed and then collected again and checked at the counter,” he says.

Some people may say that collecting bits of paper is part of the appeal of coupons. However, it would be unwise to adhere to stereotypes. Scratch the surface and you will find that the UK is a nation of coupon collectors. But as Eastwell says: “The key thing is that communications have to be personal, relevant and timely.”v