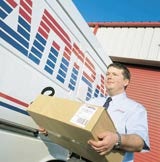 At the risk of becoming a bore, I must unfortunately return to the subject of the infamous “last mile”. The mile that seems ten times further than all the other parts of the supply chain combined. I refer of course to that critical part of e-commerce wherein a website’s digital 0s and 1s are finally turned into physical atoms, delivered to your front door by a courier.

I may well be jinxed, but I am embroiled in yet another delivery fiasco with Virgin Wines, an otherwise excellent online retailer. It goes without saying that I am, according to Virgin Wines, a minuscule bump in a usually smooth road that leads from website to wine cellar.

Virgin Wines uses a courier company called Amtrak, which I note was recently voted best in class by readers of www.e-couriernews.co.uk. My original case of wine was apparently dropped off by Amtrak and left “somewhere safe”, as I had specified on the delivery instructions.

The question is: where? I still don’t know because the wine went walkies. And I will probably never know what became of it. Why so? Because, for all its eagerness to please, Virgin Wines keeps me far, far away from any direct contact with the courier it uses.

After expressing frustration and bemusement to Virgin Wines about the wine’s disappearance from the mysterious “safe place”, I was upgraded to something called PriorityOne. Another delivery was scheduled for “sometime in the next seven days”. Not exactly the kind of precision you would expect from something with the word “priority” in it, but hey-ho, at least the company is good enough to write off an entire case of wine on my behalf.

I wait and wait and still wait. Sensing a repeat performance I make contact several times with the Virgin Wines folk and ask them if they can give me a more specific idea of when the goods will show up. I also – and here we enter the courier heart of darkness – plead to be given a direct contact number for the courier, or to have the courier call me when they are in the process of delivery. But once again, this is not to be. I appear to be asking the impossible.

Then, a chink of light! I’m told by Virgin Wines the courier is on his way and will be with me that very day. So, working from home as I do, I chain myself to the flat. All day I wait expectantly, but no joy. Finally, I call Virgin Wines again. Someone checks and tells me that a courier came and went and left a calling card.

Deep breath. Well, that doesn’t quite tally with my experience, I say, and certainly there was no calling card anywhere in sight. The helpful, apologetic woman I speak to at Virgin Wines is full of sympathy for my plight and even reveals that it used to employ a much better courier called Beck &amp; Call. Unfortunately, it went out of business.

My mind wanders back to the dot-com boom and companies such as UrbanFetch.com, which promised to bring couriers into the 21st century. Unfortunately, once the venture capital money ran out, it found that the economics didn’t work, so it too went out of business.

As I write, I’m still awaiting delivery, although my priority status means I’ve finally been awarded a rare honour: an actual time slot!

As far as I can see, there is only one thing courier companies need in order to join the 20th, let alone the 21st century: it’s called a mobile phone. This curious new device has proved rather invaluable to, well, every single person on the planet who isn’t a courier.

Yes, mobile phones cost money – but not that much money. And surely not the kind of money that can’t be factored into a viable economic model for delivery?

All I need is a quick 30-second word with a courier, and anything is possible. Why this should be so completely out of the question is beyond me. And why e-commerce companies such as Virgin Wines, so slick in every other respect, seem so averse to confronting their couriers is also a mystery. The tail is most definitely wagging the dog. There were two key conclusions I drew from my masterclass: first, most of what I had assumed was display advertising on websites is actually affiliate marketing, meaning that the advertiser will only pay on results (such as when someone clicks on the ad or buys the product advertised); and, second, many ads at the top of a Google search results page are bought by a third party, rather than the company featured in the ad. For instance, an ad saying “speedy delivery from Virgin Wine” with a direct link to its website, might well have been bought by, say, Amtrak. Each time you click on the link, you will be generating a commission for, say, Amtrak. Fascinating stuff.