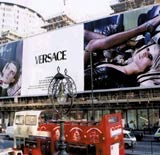 Harvey Nichols, the upmarket Knightsbridge store, has been forced to take down a high-profile billboard advertising poster, which completely covered the front of the building, after a ruling in the Court of Appeal last week.

Mega Profile, the company responsible for the site, put up the giant ad for fashion label Versace last November, to shroud alterations to Harvey Nichols’ facade. By law, the store is obliged to cover scaffolding to protect the public.

The objections to the site were raised by the Royal Borough of Kensington &amp; Chelsea’s planning department, which successfully argued that the images on it meant it was an advertisement and so fell under planning restrictions.

Mega Profile says it could have petitioned the House of Lords, but has now decided to take the ad down after months of wrangling.

Mega Profile commercial director Harry Torrance says: “Prior to the first safety shroud Mega Profile did for Harvey Nichols on another elevation, it contacted all businesses and private residents within sight of it, asking their view. There were no objections, only support.”

Torrance adds the company has had support from many high profile industry executives, including Rupert Howell, joint chief executive of Chime Communications and former president of the IPA.