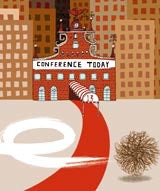 Whether it is the petrol crisis, foot and mouth disease or the terrorist attacks in the US on September 11, the exhibition industry has had to get used to dealing with the unexpected.

When the unpredicted does happen, the effect on visitor and exhibitor numbers can be dramatic, leaving organisers trying frantically to rescue a show and minimise their own financial loss.

Reduced attendances are not the only problem organisers face. In the current uncertain political climate, nervous insurance companies are warning that the cost of covering shows against cancellation or abandonment next year could rise by between 30 per cent and 150 per cent. Some companies are now refusing altogether to cover against the threat, or impact, of a terrorist attack on an event.

Kent-based Insurex Expo-Sure, an insurer specialising in the conference and exhibition sector, received as many as 40 enquiries a day immediately after the attacks on New York and Washington, as organisers tried to make claims when international visitors’ and speakers’ flights were cancelled and shows around the world were disrupted.

“If key speakers did not want to travel at all, an organiser could claim, but there is unlikely to be any compensation simply because potential visitors or exhibitors did not want to fly,” says Insurex Expo-Sure chief executive Albert Kemp.

Another company specialising in insuring exhibitions and live events – including London Fashion Week is Robertson Taylor Insurance Brokers. Account executive Justine White says rising insurance costs are inevitable: “The events sector must accept that insurance operates in either a hard or a soft market. It is soft when lots of insurers will cover a risk and hard when the opposite is true. It is all about supply and demand, and the difficult year we have had means we are moving into a hard market. Exhibition organisers can expect their premiums to rise.”

Events will still need to be covered for cancellation due to adverse weather, the unavailability of a venue, travel delays, flooding, failure of public utilities or the illness or death of a principal speaker – even the death of a member of the Royal Family on the opening day – but insurers are determined to recoup some of the huge losses suffered in the past 18 months.

Take on or pass on

Any significant hike in insurance premiums is likely to be challenged by exhibition organisers, who will naturally regard such a move as unfair. If their appeals fall on deaf ears they face a stark choice of having to absorb any increase or pass on at least some of the extra cost to their exhibitors. Both are painful options as the UK economy sits on the brink of recession.

Association of Exhibition Organisers deputy director Austen Hawkins says the current situation is unclear: “We are talking to specialists in the insurance sector about how things will change and whether premiums will rise. There is some confusion because companies are not covered in time of war, so does the ‘war against terrorism’ count? We provide the insurers with some strong business and this is likely to increase as organisers take out additional insurance cover, something which they did not feel was necessary before.”

Organisers themselves are more forthright in their views, and are angry that insurance costs could rise so steeply. CMP Information executive director Paul Thandi says a blanket rise would be inappropriate: “We must wait and see what the insurance industry does, but I would hope that – considering the volume of business we put their way – insurers will be sensible. We will not be prepared to pay huge rises if we think the insurance companies are just cashing in. Some of our shows, such as the architectural ironmongery show AI 2001, held at ExCeL in October, are clearly not under threat from terrorists.”

The AEO and its members have watched closely effect the tragic events on September 11 have had on the exhibition industry across the Atlantic and have debated what impact, if any, the trends witnessed there will have on the UK market.

Steve Miller, a strategic marketing and innovation consultant who specialises in the trade show industry in North America, says about 40 US events were cancelled in September alone because of security fears: “Organisers are definitely concerned about losing European guests – both visitors and speakers – who will not fly. This works in the other direction too, with US companies reluctant to visit the UK. I expect things to move forward again soon as many organisers of the major events scheduled for the next four to six months I have spoken to feel confident there will be only a small downturn.”

Perceived risks, such as a fear of terrorist attack, which dissuade people from attending an exhibition are different from those unforeseen problems that make it difficult or virtually impossible for visitors or exhibitors to be there. The petrol crisis, which restricted travel by road, and the foot and mouth virus which put many venues in affected regions out of action and halted agricultural shows, are two examples.

During the petrol crisis in September last year, organisers had to be creative in marketing their shows, in order to limit the damage to visitor numbers.

Insurance will usually cover exhibitions against reduced attendance if the cause is out of the organiser’s control, although a show will usually have to demonstrate to a loss adjuster that visitor levels were down by at least 25 per cent on previous years.

Reed was launching its Total Marketing Solutions during the fuel protests, and despite generating 5,604 pre-registrations only 2,056 visitors turned up. This figure would have been worse had the organiser not sent out daily e-mails to all those that had pre-registered emphasising how easy it is to reach the NEC using public transport. Attendance for the 2001 event recovered, with unaudited figures putting the number of visitors at 4,925.

CMP Information had two events taking place during the petrol shortages. It asked its staff to call filling stations to find out which of them had fuel at a particular time of day. This information was put on each show’s website and a telephone information line.

At the same time, the Wembley Conference and Exhibition Centre was assisting the Independent Living London Show, which promotes mobility for therapists, disabled and elderly people. As part of the usual exhibition package exhibitors’ vehicles are charged parking fees each day. However, during the fuel protests Wembley allowed vehicles to park for nothing throughout the show so suppliers would not have to use up petrol coming to the venue to erect stands and then returning a few days later to dismantle them.

“The petrol crisis was a completely unexpected situation – when such occurrences happen we try to co-operate with organisers to ensure an event can continue,” says Wembley marketing manager Mark Almond.

While insurance offers protection against the cancellation or abandonment of an exhibition, there is also a need to protect any valuable products being displayed. Exhibitors are usually requested to take out additional insurance cover because existing policies do not cover equipment away from the office or factory premises.

The Early Action Group is a contractor providing secure display units, which are used at large antiques fairs such as the British Antique Dealers’ Association Fair and, through an ongoing contract with Reed Exhibition Companies, the International Jewellery Show held at Earls Court each September.

At the Grosvenor House Art and Antiques Fair, EAG’s units protect items insured for more than £400m and exhibitors employ high-security carriers to transport their products to and from the event.

“When we are building the stands we will install whatever security elements an exhibitor requires, such as alarms or CCTV. Insurance companies will usually insist on specially designed glass display cabinets and a particular style of safe when items are not on view,” says chief executive Steve Barrett.

All EAG staff are subject to security checks in the weeks before a show, and visitors are security tagged and only allowed to take a handbag or briefcase into the halls. Their bags are searched when they leave.

While exhibitors need reassuring that there is adequate security at a venue and that their products will be protected, it is equally important to marketers that a brand’s image is safeguarded when it is on the road.

Marketing communications agency the Russell Organisation was in charge of security procedures on seven stands at the International Motor Show, including the BMW stand. Some of the brand’s security staff wore suits and blazers to give the impression they were part of the stand management, while other guards placed around the perimeter were dressed to look like they worked for the venue.

“The objective for BMW at any exhibition is to ensure its own security staff are not put in a confrontational position that might damage the brand. Security officials around the stand are not seen as brand ambassadors so if there is a problem and these staff get involved it is not linked directly to BMW. We are protecting the brand as well as its products,” says Russell Organisation account director Tom Gentle.

The months of planning that goes into putting on an exhibition can count for nothing if something unforeseen occurs before or during a show. Perhaps the only thing organisers and exhibitors can be sure about is the negative effect on their business if contingency plans and adequate insurance cover are not in place.

In “It’s post modernism” (MW November 1) we referred to the Quality Standard for Mail Production as QSMP. It is actually known as QMP.