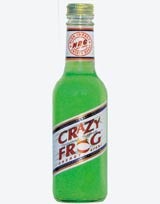 A Crazy Frog carbonated soft drink, already on shelves in Ireland, is due to be rolled out to the UK within months.

Created by Icon Distillers, the caffeine, taurine and ginseng drink will initially be sold in bars and could eventually target Red Bull’s market.

Icon Distillers has been successful in trademarking the name because the drink does not infringe on the terms of the trademark Jamster got for the same name.

Group sales director for Icon Distillers Chris Smith says that the drink will be available in the UK within three months and adds: “Crazy Frog has been selling out of every Cork and Dublin off-licence we’ve placed it in. We’re pleased with reactions to the drink and the brand name – obviously we felt we could benefit from the awareness of the Crazy Frog name, but everything else about our product is original.

“We’re eager not to become too closely associated with the ringtone as it will go out of fashion at some point.” Smith added that the drink has become very popular among 12- to 16-year-olds in Ireland.

Robert Swift, marketing manager at Jamster, says: “We are aware of the drink and though it is annoying that Icon has used our name, there’s nothing we can do. Our trademark covers digital music, computer games and downloadable products, but not drinks. But we see it as a compliment as it reflects the phenomenal appeal of the Crazy Frog.”