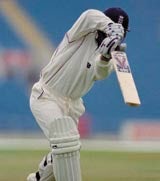 The England &amp; Wales Cricket Board (ECB)’s decision to award its television rights to Sky in a &£220m, four-year deal has been greeted with almost universal outrage. Fans, players and pundits alike have expressed their disappointment that cricket will be taken from terrestrial TV for the first time since 1938.

Sponsors, too, are rethinking their involvement in the sport in the wake of the decision. Lord MacLaurin, former chairman of the ECB and chairman of English cricket team sponsor Vodafone, has publicly stated his disappointment over the move.

Vodafone is less likely to be affected than other cricket partners. Npower has the most to lose as the selection of games sponsored by NatWest and Vodafone are already shown on Sky. Npower head of brands Kevin Peake admits the company’s sponsorship deal has been devalued and says this will affect renewal talks later this year.

“The move has totally changed the commercials of our deal. Our deal’s value is not even close to what it would be on Channel 4. Media agencies looked at the deal, of course, and the simple fact is Sky has a much smaller audience.”

Npower entered into cricket sponsorship to build brand awareness in the UK, and so is directly affected by the reduction in available audience. This is illustrated by BARB figures for this summer’s England v New Zealand Test series, which was divided between Sky and Channel 4.

The average audience for the First Test shown on Channel 4 in May varied between 631,000 people on the first day to just over 1 million on the final day. Audiences for the Second Test on Sky Sports 1 in June ranged from 97,000 on day one to a peak of 334,000 on day four.

Peake says npower will not definitely quit cricket, but the price of the sponsorship will fall. “Npower is about reaching as many people as possible. Cricket will become lower profile on Sky and so of course we won’t pay the same price as before.”

There will be a terrestrial highlights package shown at peak-time on Five, although cricket sources say this is unlikely to please cricket fans, for whom the game is a lengthy treat rather than a snapshot of the day’s best moments.

Peake adds that the prime-time slot sounds good in theory, but might not prove so in practice, as the game will be batting against schedule heavyweights such as Coronation Street and EastEnders.

Indeed, Channel 4 figures support such fears, as many of the highlights shows, including 2004’s England Tests against New Zealand and the West Indies, were broadcast in a 7.30pm slot. BARB figures show audience figures were typically 700,000, or less than four per cent of people watching at that time.

Meanwhile, Five’s penetration is still an issue. Peake points out that it is ironic the channel’s 92 per cent coverage of the UK does not include Worcester, where npower is based.

There are also wider strategic problems with the effect on longer-term viewing and participation levels.

One TV executive says that Sky’s bid was more lucrative than the option to include Channel 4, and, for all their concerns, sponsors only contribute a comparatively small &£10m a year to income. Also significantly, Channel 4 bid for a reduced number of matches. But it is ironic that a deal justified on financial gain, says the expert, could lead to the long-term detriment of the sport’s income. He points to other marginailsed sports that moved to Sky, such as boxing, golf and rugby league, which were subsequently pushed further to the margins.

The insider says: “Sky is guilty of buying up sports and then driving down price. It tried unsuccessfully with rugby union but has done it to rugby league.”

He claims Channel 4 will never want cricket back and says that the station made a net loss on the sport over the past five years. “Channel 4 was paying &£19m a year for the rights and &£5m in production but was getting teens in terms of revenue return.”

Meanwhile, he says, the BBC is not interested. “When the rights come up again, I guarantee no terrestrial channel will want to get back into cricket, which will mean the ECB has a market of one and the price will fall dramatically.”

Meanwhile, he says, a new generation will grow up without cricket on terrestrial TV, potentially reducing future audiences, wherever the games are shown.

But former ECB commercial director Terry Blake says the ECB took the only realistic course of action. “Channel 4 was bidding for reduced coverage and the BBC found cricket hard to schedule. Logically, Sky is the best option for cricket, as it benefits from such close, dedicated coverage.”

Blake adds that the ECB and Sky can overcome the potential loss of the committed or younger fans through good marketing of the game and successful selling of Sky packages.

Blake points out that Sky has already sought to attract the existing cricket audience by offering subsidised subscription fees to country cricket clubs and their members.

Much will also depend on the Sky marketing budget, as well as improving the quality of coverage of the matches. Channel 4 revolutionised televised cricket, and Sky also has a reputation for innovation in its coverage of sport, so the blow to the existing cricket audience might be lessened. But it is a new audience that needs nurturing and that will involve the ECB taking the windfall and spending wisely on the grassroots support of the game.