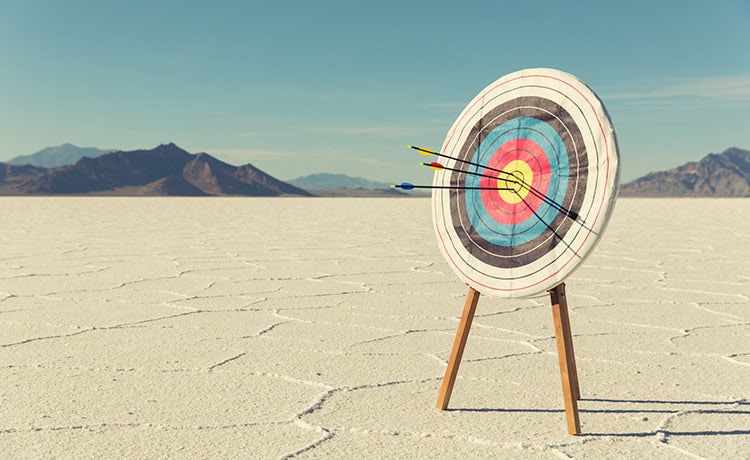 The effectiveness of creatively-awarded campaigns has fallen to its lowest level in 24 years as the marketing industry increasingly shifts to more short-term campaigns.

That is the conclusion of a new analysis by marketing consultant Peter Field of 24 years of data covering the almost 600 case studies that make up the IPA databank (including 121 that picked up major creative awards worldwide).

It found that the average number of very large business effects reported by campaigns that have been creatively awarded fell to little more than 1.4 in 2018, the lowest it has ever been in the 24-year run of the data. That is down from a high of around 1.9 in 2008, with the effectiveness in decline ever since. 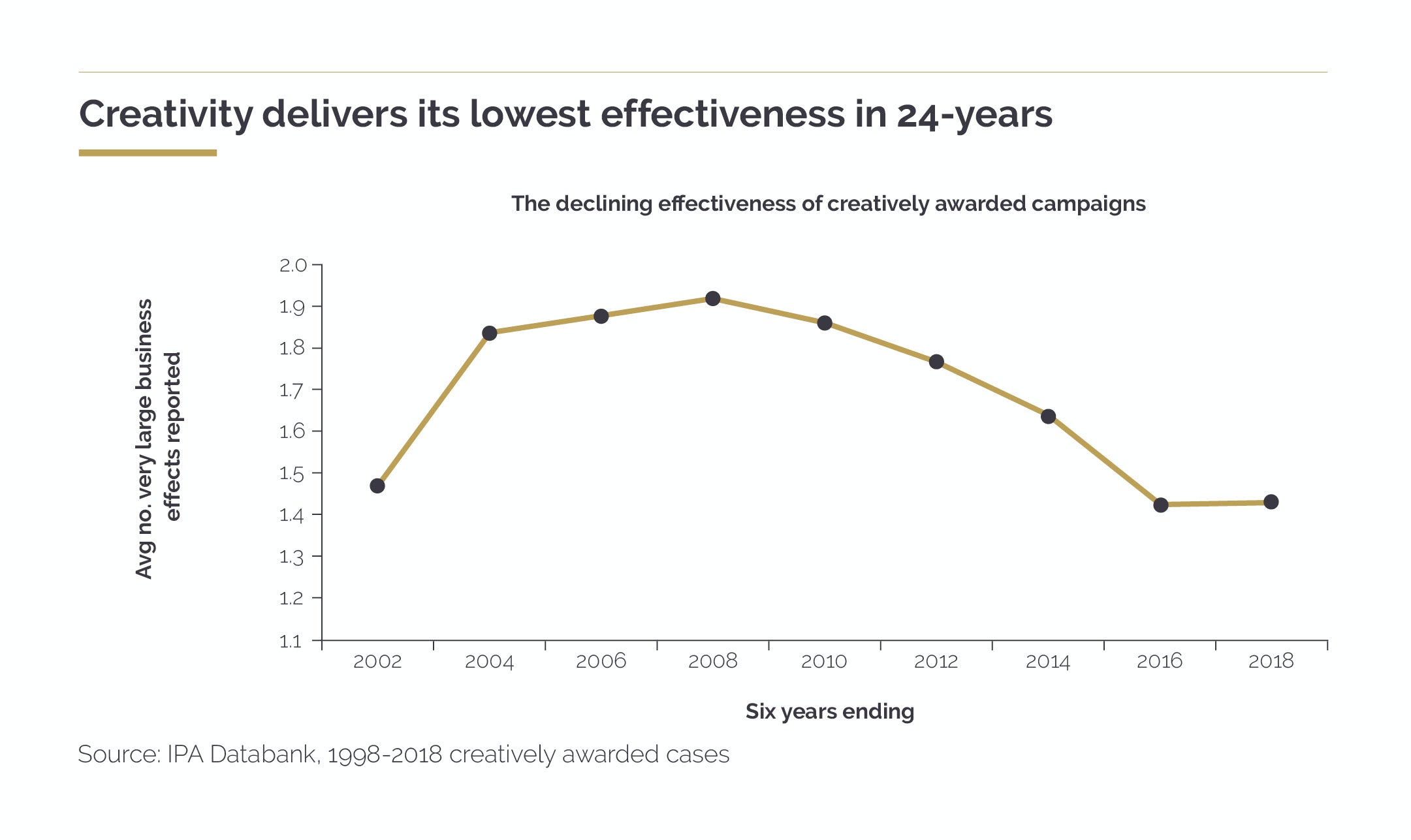 There is also declining effectiveness among all IPA case studies, with the average number of very large business effects down from almost 2 in 2008 to around 1.3 in 2018.

“Historically, creativity has been the single most important tool we can harness to
boost effectiveness,” says the report. “The evidence of this link has been very strong, with enormous effectiveness multipliers evident for the most creative campaigns. So it really matters that this link is now critically weakened and perhaps broken.”

READ MORE: Measuring the magic – Why brands need to refocus on the effectiveness of creativity

The report, unveiled at Cannes Lions today, puts the declining effectiveness of creatively awarded campaigns down to a rise in short-termism. Among these campaigns, the proportion that were short-term (evaluated over periods of six months or less) has risen from around 10% in 2002 to 25% in 2018, although the growth has levelled off over the past four years.

The mounting issue based on the 2018 data is that even longer-running campaigns are being judged against short-term sales effects rather than long-term growth. That means advertisers are forgoing campaigns that focus on emotional storytelling in favour of those that prompt customers into action.

Left unchecked, the catastrophic decline in creative effectiveness will ultimately weaken support for creativity among general management. Money spent on creativity will become ‘non-working’ budget and will be cut.

Work by Field and adam&eveDDB’s head of effectiveness Les Binet has previously shown that on average the ‘sweet spot’ for effectiveness is 62% of budget allocation to brand building. Under or over allocating budget to brand result in a loss of effectiveness, although this is much more damaging in the former.

“Under-allocation is by far the more common mistake being made by marketers today and this is just as true for creatively-awarded campaigns,” says the report. “Just as we would expect, the growing focus on short-term goals is reducing the brand building spend, causing a steady drift to sales activation spend.”

The growing appeal of ‘disposable’ creativity

In 2018, budget as a percentage of average share of voice for creatively awarded campaigns had fallen to around-0.3% and to 5% for non-awarded. However, the report highlights that because budgets are increasingly allocated to non-audited digital media, the budget disadvantage may not be as bad as the data suggests.

The report therefore blames award judges for favouring “disposable” creativity – short-term ideas many of which are focused on relatively low-budget, digitally focused campaigns. The percentage of short-term campaigns receiving creative awards has risen to almost 40%. Until 2010 that figure was below 5%. 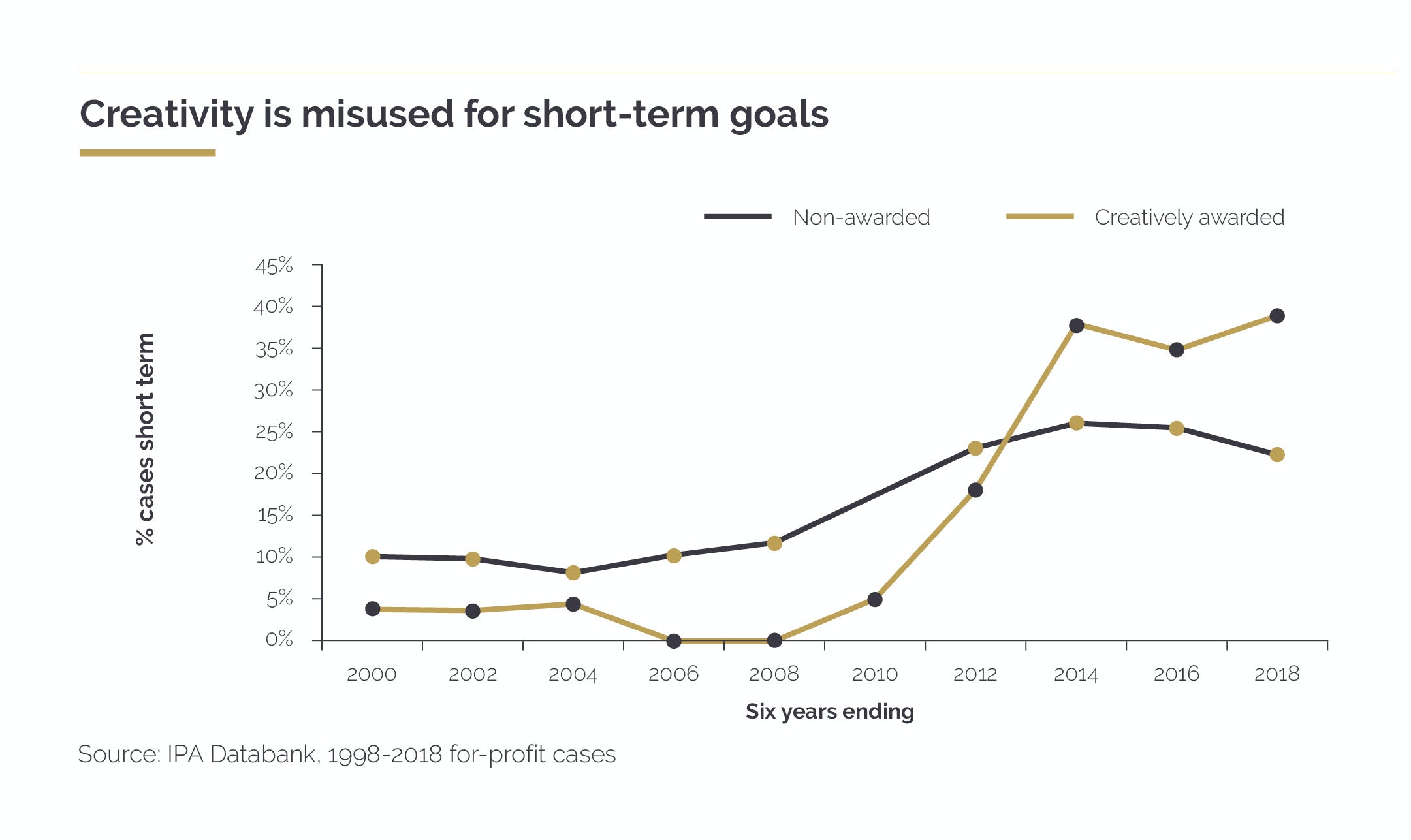 The analysis of the data also found that while the percentage reporting very large activation effects has risen from below 5% in 2002 to 45% in 2018, the percentage reporting very large brand effects has dropped. On fame effects, it reached a high of 70% in 2020 but in 2018 had fallen to around 45%, while on brand image the effects have fallen from around 60% to just 40% over the same period.

“This over focus on the short-term would damage the long-term effectiveness of any campaign but it especially erodes the effectiveness of creatively awarded campaigns because creativity is first and foremost and brand building tool whose impact on business success takes place over the long term,” says the report.

Field warns: “Despite our warnings, the misuse of creativity has continued to grow and the effectiveness advantage has continued to decline. This report is a final wake-up call for good sense, before it is too late.

“We cannot afford to go on being complacent; left unchecked, the catastrophic decline in creative effectiveness will ultimately weaken support for creativity among general management. Money spent on creativity will become ‘non-working’ budget and will be cut.”

Field offers some recommendations to reverse this. Firstly, he suggests that creative judges need to stop awarding campaigns that pursue short-term goals or that awards shows need separate classes for short- and long-term creativity. Secondly, he urges marketers to stress in briefs the importance of ideas that will build a brand over time. 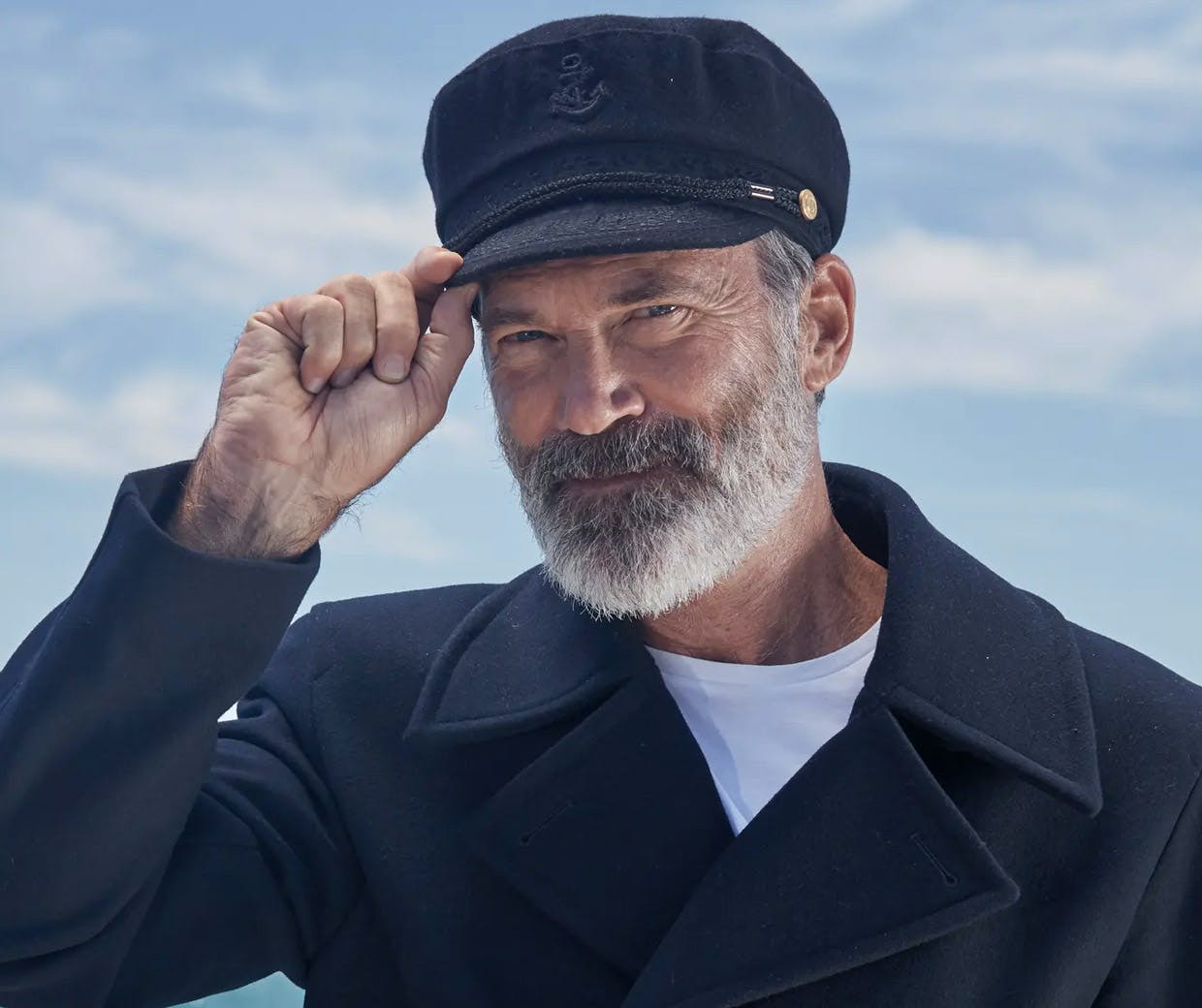 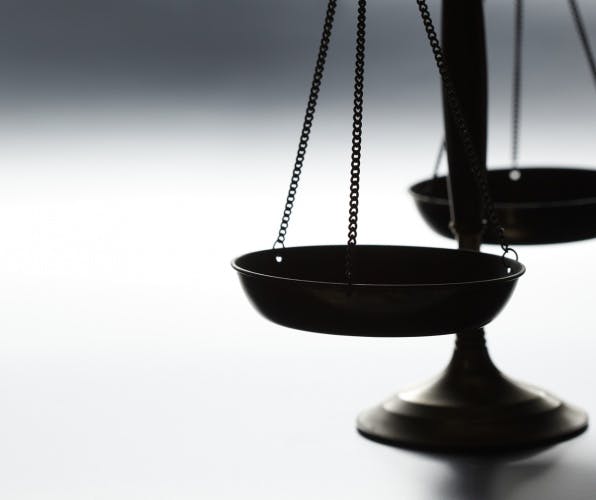 Clutter, ad avoidance, declining reach and decreasing trust in advertising are all blamed for top of funnel effectiveness declining, according to new research by the WFA.