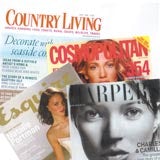 Media buyers were still debating whether publishers could cross-sell their entire portfolios as a single package, when the National Magazine Company (NatMags) took the plunge and set up an international sales house last September. The aim was to co-ordinate ad sales activities across borders for all its titles. But, less than a year later, the venture has ended in failure and the department has been closed (MW last week).

NatMags’ international sales house was set up to develop deals for multinational advertisers across the portfolio of its parent company, Hearst Magazines International – which owns titles such as Esquire, Cosmopolitan and Harpers &amp; Queen. Despite what is said to be a “substantial” injection of money from Hearst, the division had limited success. As a result, director of international business development Alex Riha has been made redundant and sales operations will now be co-ordinated through Hearst’s New York offices.

Media buyers say the failure comes as no surprise, as the effectiveness of one-stop global marketing plans is often limited. The disparate nature of advertiser objectives – and readerships’ incomes and aspirations – in different territories creates difficulties. Also, brand-building strategies, such as price promotions, differ from market to market.

MediaVest UK media communications manager Nigel Conway says: “The closure of NatMags’ international sales division did not surprise me at all. It was a pioneering idea for a UK publishing house, and although a concept like this might work across an area such as western Europe, for a larger area it depends on whether a client really wants a packaged communications solution to span borders.”

OMD UK managing partner Tim McCloskey broadly agrees. He says that the 50 states in the US could be one massive market for advertisers, but it is not the same in Europe, where most decisions are taken on a local rather than regional level.

Another media buyer says that doing business across borders can only work for bigger players, and, although NatMags had Hearst’s backing, it had to deal with the complex ownership structures of titles such as Cosmopolitan, with multiple editions.

However, NatMags has had successes. Prior to the setting up of the division, it managed to place ads for companies such as Ford and Adidas in Cosmopolitan across the UK, Spain, Italy and Germany. In January, the international sales division itself placed 60 pages of advertorial for the Nokia 8310 mobile phone, covering 20 editions in the UK, Europe, the Middle East and South Africa.

Simon Kippin, publisher of CondÃ© Nast-owned Glamour, says: “The idea of selling across borders is wonderful in theory, but in reality there are issues such as local politics, as well as the fact that each region wants to retain its local autonomy. Any global solution would have to be imposed on individual markets, which could prove to be incredibly tough.”

According to observers, most UK media owners cannot even co-ordinate their media portfolio within one country, let alone across European frontiers. The reason, they say, is that the media industry is more geared to creativity than to strategic planning. They point towards EMAP’s cross-media sales division, set up by former head of advertising Tom Toumazis, as a homegrown example. Toumazis introduced advertising packages covering magazines, TV, radio and the Internet but came in for heavy criticism when the company’s advertising revenues fell (MW September 13, 2001).

Now, EMAP claims that EMAP Advertising has experienced a ten per cent growth in revenue in the past year and that cross-media sales are increasingly driving ad revenues. EMAP director of cross media solutions Jane Kesley says: “Advertisers are seeing the practical benefits of a structure like ours. With assets such as FHM, Smash Hits, Kiss FM and The Box, we are very well equipped to offer a cross-media campaign under one roof.”

One buyer says that it took a lot of work to make EMAP Advertising fulfil advertisers’ needs. “Advertisers need to be aware that cross-media deals are not really designed to build a brand strategically. In the process of forcing a fit across several media, they are likely to bypass brand strategy all together.”

In order to drive revenue growth, the publishing industry continues to develop new initiatives. BBC Magazines recently set up a new ad sales team, the Key Customer Group, which forms a major plank of its plan to extend its magazine brands outside UK markets (MW February 21). Media experts, however, do not appear too confident about the team’s prospects.

One observer says: “BBC Magazines has never been very good at selling its own magazines, though the products are excellent. Radio Times is the only strong brand.”

Industry insiders believe that, if the recent rumoured talks between BBC Magazines and NatMags to set up a central sales house to handle their respective portfolios do bear fruit, the venture will certainly benefit the BBC – providing advertisers are ready for the call of a salesman who can sell not only a portfolio of titles, but also a portfolio of publishers.

The industry sees the fate of NatMags’ international sales division as a cautionary lesson, but is unlikely to give up the search for ways to make cross-border deals work for both advertisers and publishers.