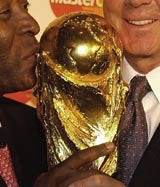 Before the 1998 World Cup, “comedians” Baddiel and Skinner predicted England’s fans would end their 32 years of hurt and “dance Nobby’s dance” in celebration.

Instead, they ended up hanging effigies of David Beckham.

Eight years and another failed campaign later, and Beckham is captain, “hurt” has turned 40 and people just want to nibble Nobby’s Nuts.

The Diary applauds this kind of positive thinking, but wonders whether Liverpool striker Peter Crouch really will come off the bench to turn the final on its head.