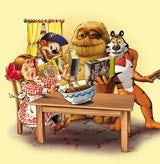 The busy lifestyle of today’s consumers means the menu on the traditional British breakfast table is changing. In fact, few of us get to sit round the table. Instead, we are turning to “on-the-go” products, putting traditional breakfast cereal brands under increasing pressure to be more innovative.

The latest development sees Quaker introduce sugar-coated HMs, a new children’s cereal fronted by Sugar Puff brand icon Honey Monster (MW last week). How this extension will be received by health watchdogs remains to be seen. Recently, they have delivered scorching criticism about the sector, reflecting concerns about obesity and the levels of sugar, fat and salt consumed by the nation.

Earlier this month, the Consumers’ Association (CA) launched a stinging attack on cereal manufacturers following research into the ingredients found in cereals aimed at both adults and children. The lobby group rubbished many of the manufacturers’ health claims made both on-pack and through advertising, claiming that they are often misleading (MW April 8).

This attack comes at a critical time for the UK cereal market as it experiences slow growth – one per cent in volume to 409,000 tonnes and 2.5 per cent in value to &£1.2bn last year (Mintel). The brand leaders have been fighting for share rather than concentrating on building the overall market. However, innovation has seen value return to the category through the launch of premium-priced cereals, such as Jordan’s, which are sold in smaller quantities.

The heaviest cereal eaters in the UK are the very youngest and very oldest consumers. Consequently, the ready-to-eat cereals sector, including big-name products such as Weetabix and Kellogg’s Corn Flakes, is stable, though its overall share of the total cereal market has declined by 1.4 per cent over the past two years. Weetabix is the market leader, having stolen the top spot from Kellogg’s Corn Flakes in 2002, although Kellogg is the market’s dominant player with a share of about 40 per cent.

Mothers may still be keen for their children to eat cereals as a way of ensuring they consume milk, but industry experts warn that consumers in their 20s and 30s are deserting the traditional daily bowl. They say the only way for cereal manufacturers to grow in the future will be through genuine innovation that is relevant to today’s busy lifestyles.

Cereal manufacturers have been quick to develop new products and the cereal bar market, pioneered by Kellogg’s Nutri-Grain in 1997, has been an area of significant growth for all major players in recent years. Kellogg has also created a new fruit-based snacking product aimed at children with its Screamin’ Fruit brand. This has had limited success so far – the Squidgers extension was axed after failing to make an impact (MW last week).

There are sub-sectors of the market, such as hot cereals, that are enjoying significant success. This area has seen an increase in value of 47 per cent since 2001. One industry insider says that this growth can be attributed directly to products such as Quaker Oatso Simple, which has seen sales increase by 27 per cent over the past year. This growth is attributed to the convenience of the product, as it can be cooked quickly, either at home or in the office microwave.

The apparent healthier side of the market is bearing up, and within this ready-to-eat sector the leader is the long-established Kellogg brand Special K. Budgens senior grocery buyer Shaun Quinton says that its success is down to its perceived health benefits and that the variants that Kellogg has launched, such as Special K Red Berries, have not stolen share from the core product. The Special K cereal bar extension is now the number one selling product in the cereal bar market, with a 6.3 per cent market share.

An agency insider says: “Kellogg has been very successful in mirroring consumer demands and mapping out the development of breakfast snacking.”

Cereal Partners, which markets its cereals under the Nestlé brand, is also trying to break into this market with the launch of the Fitnesse range earlier this year.

However, while cereal bars do suit the demands of consumers on-the-go, the CA report points out that some of these snacks are often packed with sugar, fat and salt and that, again, the health claims made about them can be misleading.

One agency insider agrees that such products are often lacking in nutritional value. He says: “The move into snacks, such as fruit-based products, does appear to be a logical step, but it seems that in making these moves the final product is not always as nutritious as the consumer would like. It can be confusing: is it a snack or breakfast on the move?”

The fact that many of the cereals and snack products containing the most sugar, fat and salt happen to be the ones most heavily marketed to children has incensed the CA. The association wrote to all of the major cereal manufacturers about this issue at the same time that it launched its research and has since set up meetings with a number of manufacturers.

The CA believes that although cereals generally have a healthy image, the category does not deserve such a reputation. Its principal policy adviser Sue Davies says: “Many of the cereals that are high in salt, sugar and fat are the ones that are marketed to children using cartoon characters and licensing. We would like to see them [the manufacturers] make more responsible health claims about these products.”

Davies adds that the CA is not against health claims being made, such as wholegrain food being good for the heart. However, it does want cereal manufacturers to be prevented from making claims like this if, for instance, a cereal is high in salt.

Food Commission research officer Kath Dalmeny agrees and says that it is the marketing of these products that is often the problem. She points out that manufacturers, most notably Nestlé, have been working to reduce the levels of salt in products and adds that this is an opportunity for all brands to become involved in healthy eating. She says: “Own-label brands are already moving ahead on this, so the more established brands will have to follow suit or they will get left behind.”

The issue of marketing foods to children is an area of much debate and many in the industry feel that lucrative licensing deals, with tie-ups to films such as Spider-Man, will eventually be restricted. Banks Hoggins O’Shea/FCB account director for Weetabix Nick Alford says that children are becoming more aware of the health issue and this means that cereal companies will have to act.

He says: “You could see regulations around licensing being introduced and then it will be harder to dress things up around a film. The communications surrounding these products is going to have to be more honest and the positioning has to be based around core truths about the product.”

Cereal Partners, Weetabix and Kellogg were all unavailable to speak to Marketing Week about the marketing of their products and innovation.

Many experts predict that because of consumers’ increasing concerns about fitness, healthier products will be one of the biggest growth areas in the next few years – particularly for the more indulgent health products that have high fruit content, such as those on offer from Jordans. The company is working to reposition itself as a provider of a range of natural foods rather than just a cereal brand, and it prides itself on using either organic- or conservation-grade cereal.

Following the launch of Kellogg’s Rice Krispie Muddles, the first prebiotic cereal in the UK, many feel that functional cereals are also likely to see high growth. Many are counting on Kellogg’s new product to mirror the success of probiotic yoghurts in the dairy category, which has been one of the fastest- growing sub-sectors of the dairy market in the past year.

However, consumers do still want convenient products. Vallance Carruthers Coleman Priest planner Dale Gall, who has worked on Kellogg and is now working on the Jordans account, suggests cereal brands should try to seek distribution through outlets positioned closer to consumers’ workplaces, for example Kellogg cereals could be sold in McDonald’s.

While cereal brands are likely to take on board the need to offer healthier products, it is unlikely that the popular children’s brands such as Coco Pops are going to disappear overnight. However, consumer demands and eating occasions are going to change at a rapid pace and manufacturers are going to have to be nimble to adapt and retain their snap, crackle and pop.

The International Olympic Committee has confirmed that former marketing chiefs Chris Welton and Laurent Scharapan have left the organisation. The IOC is still seeking a marketing director (MW April 8).

Marketing Week’s TV 2004 conference showed broad support for TV to be marketed generically, but this unity must be acted upon, says Torin Douglas