The study by Engine Service Design finds that most people (56 per cent) want services from brands to be open and honest, meaning they are ‘clear, trustworthy and nothing is hidden’. The survey asked 1,000 UK adults to select their top three priorities for customer service.

While honesty comes top, efficiency receives the second highest number of mentions, with 52 per cent. This means the service is ‘quick and responsive’. The third highest priority (44 per cent) is that the brand is knowledgeable and the service is provided in a ‘skilled and competent’ way.

James Samperi, director of Engine Service Design, believes that consumers are well placed to identify brands that are not open or honest about their services. The importance attributed to transparency means that marketers must align their brand communications with the limits of the services they provide, he suggests.

“As customers become increasingly savvy about the marketing messages they are presented with, the pressure is on organisations to ensure they substantiate those messages,” says Samperi. “Brands fall down when they promise the world but can’t follow through on their promises.”

The research reveals differences in the priorities of different age groups. For example, older people attach greater importance to the functionality of services, with 54 per cent of people aged 55 and over selecting ‘reliability’ compared to 42 per cent in the 18 to 34 age group. 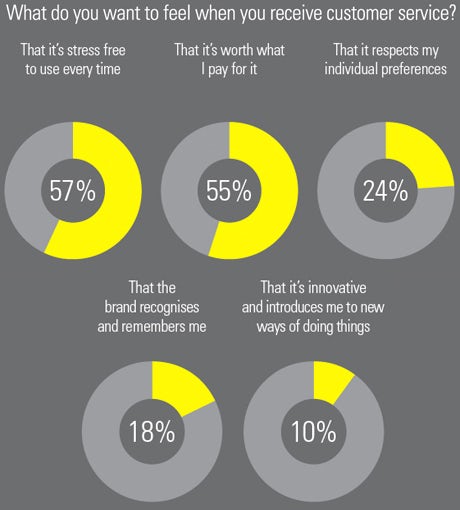 Instead, the younger age group is more attached to services that are engaging and that help to ‘build a relationship’ between the customer and the brand (14 per cent compared to 8 per cent of the 55-plus group). Samperi argues that the growth of online peer-to-peer brands, such as accommodation sharing service Airbnb, is changing the way younger people view customer service and brand relationships.

“There’s a flexible, fun culture to those brands that young people can buy into,” he notes. “Some of the older audiences have developed their own portfolio of service providers that have stood them in good stead over a period of time and are incredibly reliable. It’s more of a utility-based relationship than emotive in those cases.”

The survey asked respondents to select their top three business sectors according to the quality of customer service they commonly receive. Traditional service-based industries come out on top, with both the hotels and hospitality sector and food services and restaurants sector receiving 41 per cent of the vote. Retail is third at 38 per cent while banking is fourth with 24 per cent, placing it ahead of air travel, mobile and public services. 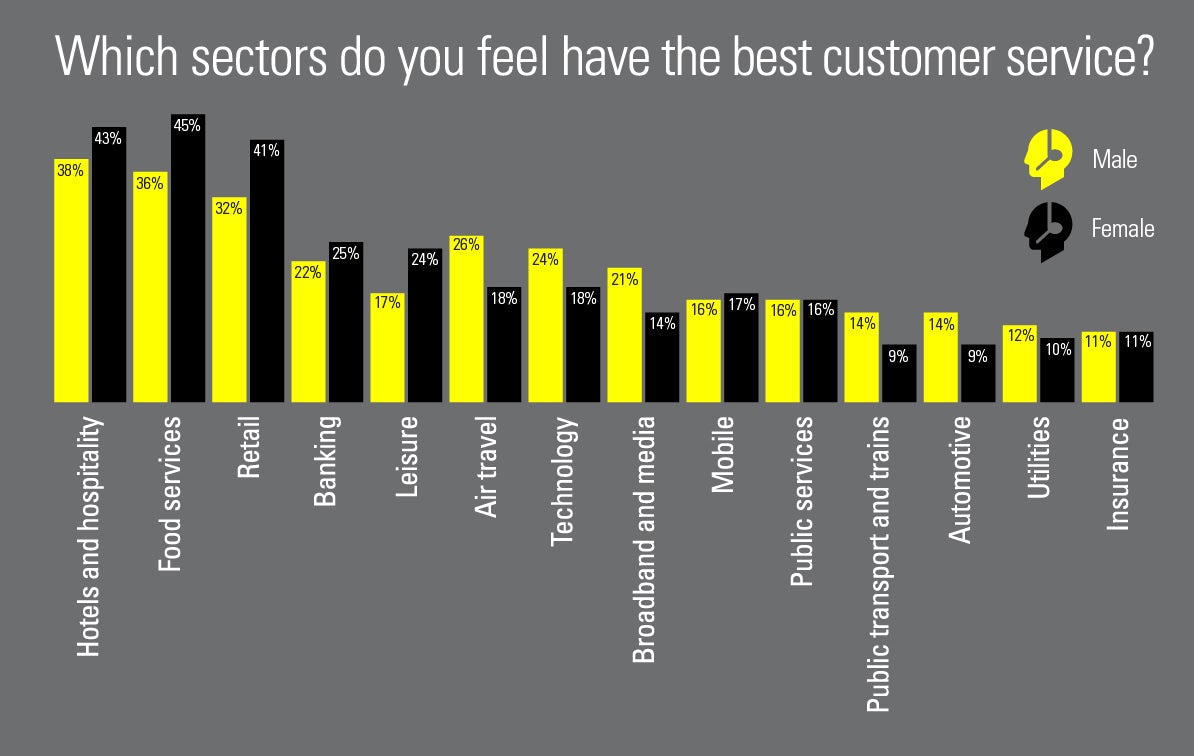 The strong performance of banking is surprising given the public antipathy towards the sector following the financial crisis. Samperi believes this is partly due to a concerted effort by the banks to improve their customer service across platforms.

“This may be down to many retail banks being more interested in engaging with their customers in the style they have been accustomed to elsewhere,” he says. “Companies such as Barclays, First Direct and Nordea – the largest financial services group in Northern Europe – have placed great emphasis on driving services to digital and looking at ways to improve customer service across branches and over the phone to better support the diverse needs of customers.”

Barclays extended this approach in May by launching ‘Digital Eagles’ – an initiative aimed at encouraging people to move online. The project, which is currently supported by a TV advertising campaign, has 7,000 members of staff helping people with their IT problems in branches across the UK. The advice is open to both customers and non-customers and covers all online issues.

Sara Bennison, marketing director at Barclays, explains that the idea for the project emerged after the company launched a training programme for staff who felt they lacked knowledge of the bank’s new digital applications. By opening up its advice to the public, Barclays aims to position itself as a socially responsible brand with services that reach beyond a bank’s core functions.

“On the one hand our role is to create a seamless, easy-to-use service for people every day, but we also have a responsibilty to tackle some of the big social issues that inhibit people’s ability to function effectively in the digital economy,” she says.

While Digital Eagles is predominantly aimed at older customers, Barclays also runs citizenship programme Life Skills to support young people looking to get into work. The initiatives reflect the ‘values-driven’ approach of chief executive Antony Jenkins after the Libor rate-rigging scandal in 2012 and the departure of former boss Bob Diamond, though Bennison says they are also part of a consistent, community-based approach to serving people.

“Customer service has always been important, even through the darkest days of Libor when trust at a big brand level took a huge knock. On a day-to-day level it was consistently strong with the customers we were dealing with,” she says. “Both Life Skills and Digital Eagles are grassroots-up initiatives that are at the heart of what we do.”

According to the study, insurance, utilities, automotive, and public transport and trains were joint lowest with each receiving 11 per cent of the vote for customer service. The mobile and technology sectors also perform poorly, with 16 per cent and 20 per cent respectively.

Despite its poor showing in the ranking, Network Rail hopes to improve its overall service by rolling out Doddle, an online shopping collection and returns service for train stations. The company, a joint venture between Network Rail and entrepreneur Lloyd Dorfman, is trialling a pilot store at Milton Keynes station. Last month it unveiled ambitious growth plans to open 300 more locations both at train stations and other population hubs in the next three years.

Doddle enables people to pick up and return their online purchases at its shops. Retailers Asos, New Look and T.M. Lewin are already using the service and Doddle has a further 75 retail partners in the pipeline. Some Doddle stores will have changing rooms for people to try on clothes after collection so they can return them more speedily if they do not want to keep them.

Chief operating officer Peter Louden claims this breadth of service will fit with people’s busy lifestyles, particularly among commuters. “We are becoming wealthier as a country, but we’re also getting busier and there are more distractions in life, so people want speed and convenience from the services they use,” he says. 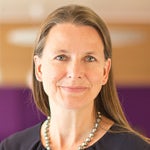 On the one hand, our customer service has an everyday, transactional purpose for many people. That means we have to be at the forefront of innovation, developing smoother and more seamless ways of doing the everyday things that people do with the bank.

On the other hand, it also means supporting people in the big things that matter in their lives. Our Digital Eagles project appears to be a very different service for a bank because it is about getting people online – not just using online banking specifically. But at the same time it’s a core part of how we can reshape the business and be at the forefront of the digital revolution without leaving anyone behind. 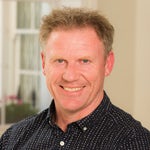 Doddle is a great alternative to the normal shopping routine. Some people like to take their time and spend all day Saturday shopping but there is a significant group of people that like to pick something up quickly. Our proposition is about getting people in and out of our shops with their collected goods within a couple of minutes. That lends itself to the pace of railway stations, where we plan to open stores across the UK.

The idea for Doddle came from our market research that found there are over 100 million failed deliveries of online purchases every year and a huge cost burden that hits retailers, parcel carriers and customers. We solve this problem by bringing everything together in one place and by focusing on convenience.

Engine Service Design surveyed 1,000 UK adults about what matters most to them when receiving customer service from a company or brand. The research also asked respondents to rate those sectors that provide the best and worst overall customer service and experience. 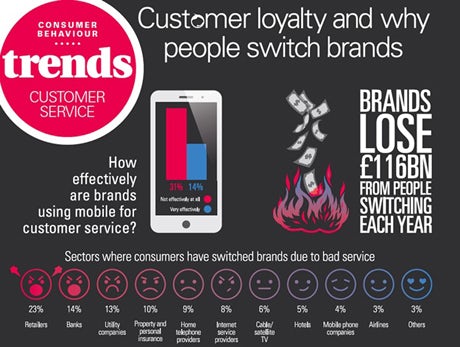