Ashton Kutcher did it first, closely followed by Stephen Fry. One million followers on Twitter was a landmark moment for that micro-blogging social network. It was also a wake-up call for marketers – if these new channels were able to generate such large communities, it was clearly time to understand how to get involved in those dialogues.

The question is, how. Imagine you were a film studio thinking of casting Kutcher in a new movie. Knowing there were 1 million people actively waiting on his every word could have been seen as a box-office guarantee. Problem is, his 2009 movie Spread grossed just $250,000 in the US.

Things have improved since then – the ensemble comedy Valentine’s Day grossed $110m this year, and Kutcher now has 5.8 million followers. Good news for the actor, but for marketers, the puzzle continues about how to incorporate social networks into their plans.

One of the current areas of focus is how to recognise influencers within a social network and harness their power. During the recent fashion weeks in Milan, Paris, New York and London, front-row seats were occupied by young bloggers whose passion has turned them into critical sources for consumers, often holding as much sway over what sells as Anna Wintour or the buyers from America’s leading retailers.

So can this influence be identified, modelled and linked to actual buying behaviour? As tools start to emerge that allow marketers to track links across social networks, could influence become as stable and useful a dimension as the stalwarts of recency, frequency and monetary value?

“There are two elements we are interested in,” says John Belchamber, head of technology transfer, business intelligence and user modelling at Telefonica.

“These are trying to track customers both offline and online, and understanding communities and how people interact within them. That has been driven by the growth of recommender sites like TripAdvisor.”

O2, the UK operation of the mobile telecoms company, was an early adopter in this space in the build-up to the launch of the iPhone. Using call record data, it assigned scores to each customer for their community role, traffic role, churn influence and churn pressure. These scores drove marketing activity and were validated by the viral diffusion of the iPhone – half of influencers bought on the same day they were contacted about it.

“We believe we are best placed at the moment to understand the anthropological interactions between people,” says Belchamber, giving an indication of where the models for this new area of analytics might be found. “The challenge is understanding the dynamics of influence and how mobile telephony allows the influence process to work.”

A key learning has been that the same individuals are not the influencers for everything. “People seek information about different things from different people,” he adds. “The most influential person may be different for each product.” Call record data gives the telecoms firm deep insight into these calling patterns, but its next challenge is how to link this to offline data sets, such as demographics, as well as other factors that could be linked back to individual customers.

Although the models and technology required for this process may be very new, Belchamber points out: “The whole area of viral marketing and community structures has been around for hundreds of years. It is nothing new.” Just as there are customers who expect companies to use these channels and the information gleaned from them, so there are others who do not. “Our usage has to be very transparent,” says Belchamber.

Those inhibitions are as old as the social interactions that digital networks have made transparent. The danger lies in assuming that because the channels are new, so must the tools be that will enable marketers to leverage influence. Analysts are spending a lot of research time trying to identify the optimal models to explain how casual chatter becomes actual buying.

One consequence of this is that there is no standard or agreed approach for modelling influence, especially for how to tie it to customer data. In this absence, less convincing alternatives are gaining traction. PR practitioners, often tasked with managing the word-of-mouth activity of brands, are applying measurements that equate online exposure with media equivalents.

That is to miss much of the complexity and value of influence. But if the models are not yet mature, some of the technology is. As Paul Alexander, chief executive of Beyond Analysis, recalls: “We did a lot of work in this area when we started up three years ago and developed an automated tool called Reputica that collected information about how people were chatting to each other. We stopped investing in that when we discovered better tools out there.

“The issue is highly complex – how do you measure whether one person posting something might have an influence on somebody else? A single tweet could explode or 20,000 people may say the same thing and it does not have much influence.”

As far as marketers are concerned, there is really only one measurement of influence that matters. As Alexander puts it: “How many of us have actually purchased something because a friend or colleague recommended it?” It is one of the curiosities of influence through social networks that the opinions of people we have never met can be extremely influential. Reading a bad review is one such example.

One of the cornerstones for building a measure of influence is therefore not just how many people go to a particular source, says Alexander, but how many times that original source is used as credible content elsewhere, for example by retweeting it. It is this multiplier effect that takes social network influence into another dimension, because direct linking to the original source may only happen within a limited circle.

If measuring that sounds both complicated and familiar, that’s because it is. “Understanding social influence involves similar algorithms to those used by Google for natural search rankings,” says Alexander. “If anything, it is probably more complicated.”

A further challenge for marketers is that they cannot just intrude into these influence circles with their brand messages. Complaints-based sites such as btcomplaint.co.uk or Orangeproblems.co.uk may be an irritant, but they do not take kindly to reputation managers trying to soothe users.

They do offer a useful source of information on those problems, however, as long as the company can listen correctly. That includes filtering data so that postings about problems with orange paint or orange fruit do not get mixed up with those about the Orange network.

Ensuring that influencer marketing moves beyond the reputation management approach demands a much richer set of data to be integrated. In particular, getting to understand just who those anonymous bloggers and tweeters might be moves a brand closer to linking its online reputation with its transactional activity, via influence. US-based aggregation sources like Rapleaf and Flowtown are helping marketers to plug into what users publish about themselves that makes them identifiable.

Michael Della Penna, executive vice-president of threadmarketing, an agency formed after a double acquisition by StrongMail, says: “It allows you to get a sense of how active they are and in which social networks, so you can then use models like Forrester’s Technographics to understand them. That gets you close to knowing how a customer in your database is interacting with your marketing.”

Embedding tracking tools into websites, email and other digital channels enables marketers to follow customers across social networks, says Della Penna. “You can understand who among the target prospect base is sharing links and content and then flag them as an influencer. It is just another data set you can feed into your data mart.”

Della Penna emphasises that using this data to “listen” to the prospect base is critical to the future success of marketing to it. “You have to be where your customers are first – that is crucially important to having a successful dialogue,” he says. Similarly, the way influencers use each channel has to be respected, so material that is being distributed through Facebook should not be repeated in Twitter.

Influencer marketing is so new that few companies have understood it, let alone tried it. And much of the practice that is developing comes out of the US, where the data protection rules about use of information from social networks are so far unwritten. In Europe, they fall into a grey area that the European Commission may soon tighten up.

Until that happens, social networks cannot be ignored, nor can the power of those influencers who use them. Whether influencers are also customers is the big question that remains to be answered.

Peers and pareto
The Pareto Principle, sometimes known as the 80/20 rule, is at work even in these newest circles. Forrester has identified that, among the US population, 16% are “mass influencers” and that this group is responsible for 80% of the influence impressions and posts about products and services in social channels.

Forrester divides this group further into two types: “mass connectors”, who create impressions about brands and services on Twitter, Facebook and the like and make up 6.2% of all online adults; and “mass mavens”, who create and share content in YouTube, blogs, review sites, and so on – 13.4% of online adults fall into this group. Both types generate eight out of ten of the impressions or posts found in these channels.

Friends and subscribers
Not all channels are equal, as National Geographic found out through analytical work done using Omniture’s SiteCatalyst into the source and value of visitors to its site. Social networks were found to be generating 5.2% of traffic, compared with 42% arriving via organic search. But this source was growing quickly – rising to 8.4% in just one quarter.

Engagement is a key measure for a website publisher. What National Geographic found was that visitors referred from social media viewed an average of 4.2 pages per visit, compared with 13.6 pages by those clicking through from a house email.

Drilling down into social media subcategories revealed that half of these visitors were referred from social news sites like Twitter, 23% from bookmarking sites, 16% from social networks such as Facebook and 10% from social knowledge providers like Wikipedia.

Critically, National Geographic found visitors from social media have a propensity to purchase just 5% of the average. Yet when the publisher promoted a special $15 subscription for Facebook users, the code went viral via a deals network. As a result, more subscription orders were taken online in a single day than on any other day that year. 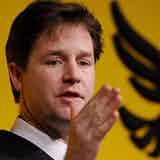 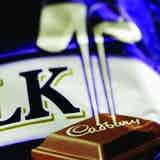 Cadbury has rubbished reports that it is dropping the “glass and a half’ slogan from its marketing. 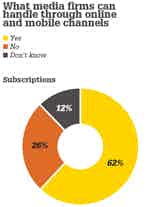 Changes to the media landscape are no surprise. Just take a look at your own consumption – perhaps some radio in the morning and a daily newspaper en route to the office, email alerts in your inbox and a log-in to several publishers’ websites.