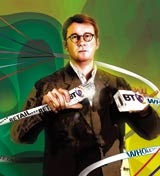 BT chief executive Ben Verwaayen must have been rubbing his hands with glee last week when he managed to fend off the prospect of a break-up at the mighty telecoms company.

But he was not the only one. The majority of BT’s rivals welcomed the deal that was struck with Ofcom chief Stephen Carter. In their eyes, it at last puts the telecoms giant on a level playing-field.

For years, rivals have accused BT of wielding power unfairly, through its control of telephone exchanges and the “last mile” of cabling to consumers’ front doors. In effect, consumers wanting fixed-line telecoms or broadband services from competitors could never completely sever their ties with the former state monopoly unless they signed up to cable or one of a handful of other operators. And BT’s commercial rivals had to build into their UK consumer pricing whatever charges the telecoms giant decided to make for its wholesale services, subject to intermittent regulatory interference.

But that is about to change: BT has agreed to restructure its operations so that its wholesale division, which owns the cables and sells capacity to other telecoms companies, is run at arm’s length under the provisional name of Access Services. The deal, which is due to come into effect in January next year, means all competing companies will be given equal access to exchanges and relevant support services on the same terms BT gives to its own retail arm, which sells products such as phone connections and broadband direct to consumers.

The technicalities of the arrangement will be published tomorrow (Thursday) for industry-wide consultation, and most of the telecoms companies that are likely to be affected by the changes are waiting to see the full proposals before they comment in detail.

Nevertheless the industry agrees that the new arrangements will give greater commercial flexibility to BT’s rivals, resulting in a broader range of products and increased price competition as they battle for new customers.

Antony Walker, chief executive of the Broadband Stakeholder Group, the Government’s key advisory group on broadband issues, says: “The settlement outlined by Ofcom marks an important step forward for the UK broadband market. It reduces the cloud of regulatory uncertainty that has been hanging over the industry and provides a greater degree of confidence for companies competing in the broadband market. This should result in more competition, innovation and investment. We’ll be watching carefully to see how the market progresses over the next 12 months.”

The BSG’s membership includes major players in the telecoms market such as BT, Cable &amp; Wireless and Thus, as well as hundreds of internet service providers.

Some industry experts predict that the deal with Ofcom will trigger a massive investment spree, both by BT (which has been reluctant to invest too much capital while faced with a possible break-up of its business) and by its rivals.

In particular, the agreement means that rivals are more likely to spend money putting their own equipment into BT’s exchanges, so they can offer an alternative to BT for the final connection between an exchange and a business premises or home. At the moment, some 5 million UK phone customers are paying one of BT’s competitors for their calls, but are still having to pay BT for line rental – a situation which rival companies allege gives BT an unfair marketing advantage. If these companies can cut BT out of the relationship, by offering customers the ability to pay for call charges and line rental together, then they will – indeed, some already have done so.

Increased investment will also have a profound effect on the broadband market. Companies will be able to offer customers a much greater spread of connection speeds to suit different needs and pockets. The current entry level package for broadband services starts at around 300kbps: the highest speed currently on offer is 8Mbps – but experts suggest the UK could see speeds of 12Mbps or even 20Mbps relatively soon. That, in turn, would act as a catalyst for the widespread introduction of services such as internet telephony products using Voice Over Internet Protocol (VOIP), or television- and video-on-demand provision.

BT has also agreed to cut the charges it makes for access to its lines, giving rivals three options: to pass the cost savings on to their customers; to use the extra cash to invest in new equipment or the development of value added services; or simply to increase margins by keeping the saving.

However, while there will probably be a much wider range of services available, with a greater variety of price-points, there may actually end up being fewer companies active in the market. The explanation is a simple one: money. BT’s rivals may have been demanding greater access to BT’s exchanges and networks, but in reality only the biggest players have the hard cash to take full advantage of that increased freedom. So smaller companies may now have to merge in order to fund increased investment.

More services for consumers and business users should also mean more marketing spend in the near term, although the anticipated consolidation in the industry may offset that over time.

Of course, there will be BT’s own investment in the rebranding of Access Services, which will have a completely new corporate identity that will go on the side of the group’s 22,000 vans, uniforms for the 30,000 staff, signage for BT exchanges and on corporate stationery. A number of brand names, including Openreach, Openloop and Broadbuild, are being considered for the new division, which will have an turnover of between £3bn and £4bn.

While the new unit will market its services actively, its customers will be a relatively small number of telecoms companies, rather than the mass of the UK’s business users or households. There may still be a business- and consumer-facing brand-building campaign when the new company name and identity launch, but this has yet to be confirmed.

The idea is that the new division will treat all the competing telecoms companies equally, so BT will have no in-built advantage over its rivals. Whether that happens remains to be seen.

In the past BT, has denied favouring its own retail division over rivals on issues such as pricing of wholesale services, but in future it will be given little opportunity to do so even if it wants to. An independent Equality of Access Board is being set up to oversee the day-to-day operations of Access Services and if BT is found to be in breach of its legal undertakings, it will subjected to a huge fine. With that kind of threat hanging over the major player, the market as a whole looks set fair to flourish.