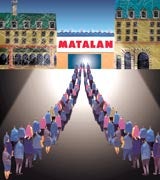 The recent departure of Matalan chief executive Angus Monro may have done further damage to the discount retailer’s battered share price, but it has also focused attention on the future direction of one of the UK high street’s greatest success stories of recent years.

The official reason for Monro’s departure was his refusal to commit himself to the company for more than two years. After its meteoric rise over the past half decade, with like-for-like sales outstripping its high-street rivals, there are big questions about Matalan’s medium-term strategy.

Monro did not appear to have the answers and, more worryingly, neither do those left behind to run the company.

Despite numerous phone calls and e-mails, Matalan refused to respond to any questions about the chain’s plans for expansion, or to throw any light on Monro’s sudden departure.

Seymour Pierce analyst Richard Ratner believes Matalan’s like-for-like sales growth – which hit 21.7 per cent in the year to February 24 – is likely to fall to eight per cent in the current year, and five per cent the year afterwards. After that, growth could slow further, as the chain will soon have stores in most of the UK’s key towns and cities. Matalan is rumoured to be contemplating expansion in Europe, and may diversify away from its core business as a clothing retailer – with financial services, cars and even pets being mooted as potential development areas.

Matalan’s share price suffered a steep fall in early January this year, after the company reported that like-for-like sales growth stood at 16 per cent in the final six weeks of 2000, and City investors realised it was not quite the high-growth stock they had once thought. While growth still outstripped any of its rivals, it was dawning on investors that the Matalan story would not necessarily have a happy ending. A week later, other discounters including Peacock, Brown &amp; Jackson and QS posted profit warnings. After years of strong growth, questions are now being asked about where the discount sector can go next.

Europe beckons, but the continent already boasts highly-developed discount formats – indeed it was the Europeans who exported the concept of discount supermarkets to the UK during the recession of the early nineties, with the arrival of Aldi, Lidl and Netto.

Expansion into new areas can be dangerous. Matalan knows how to sell clothes, and this expertise helps it to keep costs down (no need for expensive consultants at their head office). Selling financial services or any other non-core product would require costly development budgets, expensive testing, and more marketing. In other words, it would be a risk, and risk is expensive. It would go against the nature of discounting, which is to keep it cheap and keep it simple.

Retail Intelligence analyst Bryan Roberts says that, although Matalan is a very new phenomenon in the UK, similar chains are already well-established in France, Germany and the Netherlands.

Roberts believes that moving into other markets would be a big mistake for Matalan.

“It should stick to what it knows and does best,” he says.

It may take the arrival of another overseas trend to ensure the future of Britain’s home-grown discount sector – which also includes Primark and New Look. This trend comes from the US, and some observers believe it is about to become all the rage: it is the recession that is threatening the US and which, it is feared, will start to affect British consumers within the next 18 months. The decision by the UK’s Monetary Policy Committee last week to cut a quarter point from base rates shows that six or seven people at least believe the UK economy is slowing.

For Matalan, a recession could be a godsend. The chain has tapped into the new realities of retail survival – decent quality at bargain prices – and it would be in a prime position to survive an economic bloodbath that could damage many of its rivals.

The discounters are already prepared for a downturn. They have the cheap sourcing and grey-market contacts, low-cost distribution systems and, most importantly, the value-for-money reputation and the customer base to cope with a declining economy. Discounters were born of the experience of recession in the early nineties, and have prospered during the years of economic growth that followed. They appear to have stumbled on an enviable formula: the recession-proof retailer that prospers during the good times as well as the bad.

It is not inconceivable, however, that even the discounters could suffer a slump in sales in a recession. Their resilience depends on the fact that they have not saturated the market, and that there is a large and more expensive high-street sector, which customers will desert for the discounters when money becomes tight.

Discount clothing retailers have been the light at the end of what some would say has been a long and dark tunnel in fashion retailing. The sector’s market share has increased to 9.6 per cent, an increase of 1.2 per cent in the past 12 months, according to the latest report from Verdict.

Monro’s sudden departure from Matalan doesn’t detract from the fact that the retailer is reporting sales increases of almost 22 per cent for the year to February 24, and that Matalan’s market share has risen seven per cent since 1996 – according to the Verdict report – knocking New Look back into second place, with 18.4 per cent.

Also moving up the market share ladder is Dublin-based Primark, which offers a slightly less upmarket range than the top runners, but still holds 12.2 per cent of the market.

But growth must come to an end some time, or markets become saturated. So how much more growth is sustainable, with the top three players already owning 700 stores nationwide, and the high street breathing down their necks?

Verdict chairman Richard Hyman believes there is room for good growth over the next five years, but it cannot be sustained at the rate achieved during the last five.

A slowdown is inevitable, says Hyman, mainly because sustaining the growth rate of an undeveloped market, when it is already so much larger than it was several years ago, is not possible.

“The easy growth has been achieved already in the clothing sector. The discounters have taken sales from weak mid-market players which are vulnerable,” says Hyman.

The high-street chains are not the only traders which are suffering at the hands of this growing sector: mail-order companies have also been hit hard, says Hyman.

“They [mail-order companies] are very vulnerable on price because their main target is budget-driven shoppers, and there has never been so much choice in the budget sector.”

Mind the quality and feel the width

Hyman believes the success of Matalan and Primark is due to a level of quality which has never been seen before in the budget sector. It is this improvement in style and quality which has been the key to the discounters’ success. But the value traders also caught the public at the right time, and in the right economic atmosphere – they launched into the market just as consumer attitudes were changing, from “loyal follower” to “promiscuous shopper” with little or no loyalty towards particular brands.

A recession is traditionally the time when value retailers come into their own. As a spokesman for Primark says “We prosper in times of others’ adversity.”

Primark has 96 stores, and plans to open another 14 by the end of the year. Unlike Matalan, Primark is moving directly into the high street. The company picked up several of the failed C&A stores after their closure, and has also bought a number of Bhs sites. It is moving into larger stores, including a 50,000 sq ft store which will open in Newcastle later this year.

The spokesman says that although it has no plans to expand outside the UK and Ireland, or to move into e-commerce, nothing can be ruled out for future operations.

The high street will rise again

But the high street chains are starting to fight back, closing the price gap between themselves and the value traders. The Verdict report shows the gap between discounters and mid-market high-street retailers is narrowing, from 50 per cent on womenswear and 60 per cent on menswear last year to 38 per cent for women’s clothing and 39 per cent for men’s now. The high street also leads the way in store design, and high-street stores are more likely to be designed as part of a shopping “experience”. The discount chains are unable to follow along these lines because, as Hyman says, marble floors and chandeliers give customers the wrong impression. A store should show what it stands for, and discount means value for money.

Whether the UK talks itself into a recession or, as some analysts believe, survives unscathed the downward trend in the US, one thing is certain: the rapid growth in the discount sector is bound to slow.

This may allow the high street breathing space and even a chance to claw back some of its lost market share, but there is a lot of housekeeping to be done before any real comeback can be made. For the moment, the likes of Matalan appear to have the fashion sector sewn up.